It is going to be Syria’s turn

If the likeness between ravaging regime-change scenarios in Iraq and Libya is any indication, the future of Bashar al-Assad’s sovereignty in Syria might be hanging by a thin thread. The heart of the matter - underscores this analyst - is that regime change in Syria is absolutely central to US designs on the Middle East. The stakes are so intertwined that a host of stragetic gains could be achieved in one fell swoop, not least shaving Russia’s and China’s clout in the region. This is not an opportunity that Washington would want to miss. 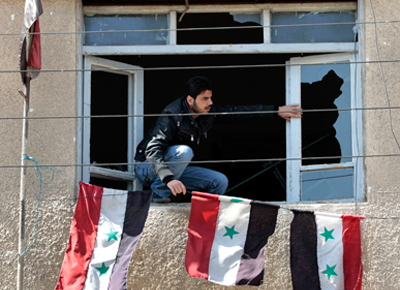 The visuals beamed from Tripoli last night had an eerie familiarity. Cars blowing horns, Kalashnikovs firing into the air, youth and children aimlessly wandering on streets littered with heaps of debris, western cameramen eagerly lapping up the precious words in broken English by any local fellow holding forth on the stirring ideals of the 1789 French Revolution and the Magna Carta – the images are all-too-familiar. Somewhere else, some other time, one had seen these images, but couldn’t exactly place them. Could they have stealthily crept up from the attic of the mind, a slice of memory that was best forgotten or purged from the consciousness? Now, the morning after, it is clear the television channels were only replaying the scenes from Baghdad in 2003.

The narrative from Tripoli bears uncanny resemblance to Baghdad: A brutal, megalomaniacal dictator, who seemed omnipotent, gets overthrown by the people, and a wave of euphoria sweeps over an exhausted land. As the celebrations erupt, the western benefactor-cum-liberator walks on to the centre stage, duly taking stance on the ‘right side of history’. In the 19th century, he would have said in Kenya or India that he was carrying the ‘white man’s burden’. Now he claims he is bringing western enlightenment to people who are demanding it.

But it is a matter of time before the narrative withers away and chilling realities take hold. In Iraq, we have seen how a nation that was tiptoeing toward the OECD standards of development hardly 20 years ago has been reduced to beggary and anarchy.

Libya’s democratic opposition is a myth conjured up by the western countries and the ‘pro-West’ Arab governments. There are deep splits within the opposition and there are factions ranging from genuine liberals to Islamists to plain lumpen elements. Then there are the tribal divisions. The infighting among the various factions seems a recipe for another round of civil war, as the factions that have neither legitimacy nor authority jostle for power. The acuteness of the rifts burst into the open last month when the opposition’s commander-in-chief Abdul Fattah Younes was lured back from the front on a false pretext, taken away from his bodyguards and brutally tortured and killed by the rebels belonging to an Islamist faction.

The western media have begun openly discussing the role played by the North Atlantic Treaty Organization [NATO], which time and again intervened to tilt the military balance against Muammar Gaddafi. The revolution looks more like a coup d’etat instigated by Britain and France. Even then, it took the western alliance an awfully long time stretching over 6 months to get its ‘boys’ into Tripoli. Gaddafi is still keeping them guessing as to the manner of his grand exit. The stunning truth is that Gaddafi should decide when to stop fighting despite having the men and the material to prolong his defiance for a while.

His course of action in the coming hours or days would have great bearing on what follows. If there is going to be heavy bloodshed, revenge acts by the victors over the vanquished will likely follow. In political terms, Gaddafi’s imminent fall doesn’t mean the opposition has won. Divested of the NATO’s tactical support, the opposition would have lost. The big question, therefore, is going to be about NATO’s future role in Libya. Alongside appears the question of whether the NATO would now turn attention to Syria.

With the mission of ‘regime change’ successfully accomplished, NATO ought to leave the Libyan theatre. The United Nations Security Council Resolution 1973 has been overtaken. But the NATO’s withdrawal is too much to expect. Libya’s oil has been the leitmotif of the western intervention. Gaddafi’s recent proclivity to turn to Russia, China, Brazil and India to bring them into Libya’s oil sector obviously threatened the western interests. The pro-democracy rhetoric emanating out of London and Paris had all along had a hollow ring. The NATO’s intervention in Libya has stretched the limits of international law and the United Nations Charter. The alliance finds itself in the ludicrous position of seeking the legitimacy for its continued presence in Libya from the shady elements who masquerade as the ‘democratic’ forces, whose popular support is thin on the ground, on the pretext that there is still a job to be done.

There is indeed going to be a job to be done. It could well turn out to be Iraq and Afghanistan all over again. Resistance to foreign occupation is bound to appear sooner rather than later. Libyan tribes are steeped in the folklore of resistance. On the other hand, a great paradox of geopolitics is that anarchical conditions provide just the requisite pretext for occupation. The story of Libya is not going to be any different from that of Iraq and Afghanistan.

The West’s Libyan intervention introduces new templates in the geopolitics of the Middle East and Africa. It has brought NATO to the eastern Mediterranean and Africa. This is of a piece with the United States’ post-cold war strategy to mould the trans-Atlantic alliance into a global organization with the capability to act in global ‘hotspots’ with or without UN mandate. A pivotal role for the alliance in the ‘new Middle East’ seems all but certain. There is an ominous ring to the recap of the Libyan chapter by British Deputy Prime Minister Nick Clegg: “I want to make it absolutely clear: the UK will not turn its back on the millions of citizens of Arab states looking to open up their societies, looking for a better life.”

Was he talking about Syria? Surely, Clegg couldn’t have been suggesting that Britain is raring to “open up” the societies in Saudi Arabia or Bahrain or Yemen and make the tribals living out there into modern-day citizens. With the Libyan operation drawing to a close, all eyes are turning on Syria. The Wall Street Journal speculates: “Libyans’ success affects the potentially more important rebellion in Syria… Already there are signs Libya is giving inspiration to the rebels trying to oust [Bashar al] Assad.” But then it also adds a caveat without which the discussion will remain incomplete: “There are crucial differences between Libya and Syria, and the Libyan template will be hard to replicate in Damascus.”

However, the western mind is famous for its innovative capacity. Without doubt, Syria occupies the heart of the Middle East and conflict breaking out there will most certainly engulf the entire region – including Israel and, possibly, Iran and Turkey. On the other hand, the calibrated western moves in the recent weeks, racheting up sanctions, are strikingly similar to those taken in the prelude to the Libyan intervention. Sustained efforts are afoot to bring about a unified Syrian opposition. Last weekend’s conclave held in Turkey – third in a row – finally elected a ‘council’ ostensibly representing the voice of the Syrian people. Evidently, a focal point is being carefully crafted, which could be co-opted at a convenient point as the West’s democratic interlocutor representing Syria. The fig-leaf of Arab League support is also available. The ‘pro-West’ Arab regimes, which are autocratic themselves, have reappeared in the forefront of the western campaign as the flag carriers of representative rule in Syria.

Conceivably, the main hurdle would be to get a United Nations mandate for the western intervention in Syria. But the Libyan experience shows that an alibi can always be found. Turkey can be trusted to play a role here. When Turkey gets involved, Charter 5 of the NATO can be invoked. The heart of the matter is that regime change in Syria is imperative for the advancement of the US strategy in the Middle East and Washington is unlikely to brook any BRICS obstacles on its path, since the stakes are very high. The stakes include the expulsion of the Hamas leadership from Damascus; the break-up of the Syrian-Iranian axis; isolation of Iran and a push for regime change there; weakening and degradation of Hezbollah in Lebanon; and regaining Israel’s strategic dominance over the Arab world. And, of course, at the root of it all lies the control of oil, which George Kennan had said 60 years ago are “our resources – and not theirs” [Arabs’] – which are crucial for the continued prosperity of the western world. Mock at him if anyone claims that cash-strapped western governments and their war-weary citizens have no more appetite for wars.

Finally, all this means in geopolitical terms the rolling back of Russian and Chinese influence in the Middle East. A subtle western propaganda has begun pitting Russia and China as obstacles to regime change in the region – standing on the ‘wrong side of history’. It is a clever ideological twist to the hugely successful Cold-War era blueprint that pitted communism against Islam. The body language in the western capitals underscores that there is no conceivable way the US would let go the opportunity in Syria.

Source : “It is going to be Syria’s turn”, by Melkulangara K. Bhadrakumar , Voltaire Network, 30 August 2011, www.voltairenet.org/article171209.html

Tehran reaches out to Egypt’s Morsi

Source : “It is going to be Syria’s turn”, by Melkulangara K. Bhadrakumar , Voltaire Network, 30 August 2011, www.voltairenet.org/article171209.html