Chávez announced the creation of the ministry of Popular Economy 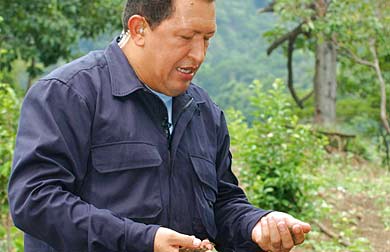 President Hugo Chávez announced the creation of the Ministry of Popular Economy, headed by Elías Jaua. Rather than a ministry of State, the Ministry of Popular Economy will be a ministry with its own bureaucracy and organizational structure. The National Institute of Rural Development (Inder), the Institute of Microfinancial Development (Fondemi), the National Superintendence of Cooperatives (Sunacop), the Women’s Bank (Banmujer), and the Bank of the Sovereign People will be ascribed to this new governmental entity.

Chávez indicated that this measure is meant to give an impulse, at full speed, to Misión Vuelvan Caras (government program to train the unemployed, while they receive a scholarship, for their later insertion in the national productive system) providing land, resources, personnel, and training. As for the facilities of the headquarters of the new ministry, the president said that the Fund for the Guarantee of Deposits and Banking Protection (Fogade) has donated a set of buildings for this purpose.

With the birth of this new ministry, the Ministry of Social Economy -that until now had been run by Nelson Merentes- will be the Ministry of State for the Financing of Development, which will group the state financial system: the National Bank for the Economic and Social Development.(Bandes), the Bank of Promotion of the Andes (Banfoandes), and the Industrial Bank of Venezuela (BIV).

The president referred to the recently created Ministry of Nutrition; under general José Oropeza. The Venezuelan Agrarian Corporation, The Food Supply Market (Mercal) -which includes Supermercal, Mercalitos, (Popular food shops) and the Feeding Homes -the Food Supply Strategic Program (Proal), the National Institute of Nutrition (INN), as well as the silos will be subordinated to this new ministry.

Published in Quantum No 32