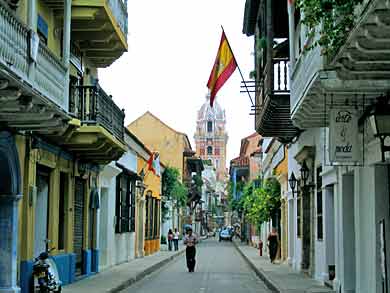 The Second Major Binational Business Round between Venezuela and Colombia will be held on March 13th, 14th, and 15th of 2005, in Cartagena de Indias, Colombia; said the president of the External Trade Bank (Bancoex), Víctor Álvarez.

He said that the purpose of this round is to consolidate the economic and productive base of Latin American integration and to strengthen South to South cooperation.

He commented that this event will reactivate and strengthen commercial relations by increasing trade between both nations. A thousand participants will attend the meeting, including Colombian and Venezuelan representatives of cooperatives and of small, medium, and big businesses.

Alvarez explained that that these people, based on principles of solidarity and regional cooperation, will close multiple deals, taking advantage both of the different opportunities resulting from the commercial agreements between Colombia and Venezuela and of the substitution of imports from other countries.

He informed that one of the goals of this event is to achieve a total of 3 billion U$ in trade in 2005, and to surpass the 80 million U$ of the first Major Binational Business Round between Colombia and Venezuela held last March in Margarita, Venezuela.

Alvarez announced that several incentives will be offered in this round, including training, preferential loans, advice, and free diagnostic of the businesses.

In this event, there will be a commercial exhibition (Expopymes) of 60 stands and two exposition rooms, especially focusing on the small and medium businesses. Additionally, an advanced technological platform will enable businessmen to register the profile of requested and offered products, monitor their possible counterparts, and organize business agendas.

Source : “Major business round between Colombia and Venezuela to be held in March”, by Alia2, Voltaire Network, 17 December 2004, www.voltairenet.org/article123255.html

Source : “Major business round between Colombia and Venezuela to be held in March”, by Alia2, Voltaire Network, 17 December 2004, www.voltairenet.org/article123255.html