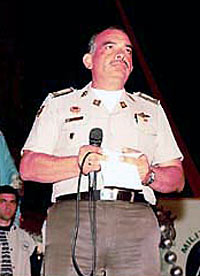 National Guard General Felipe Rodriguez, known as “the Crow,” who was wanted in connection with terrorist bombings and murder, was arrested yesterday. The general first became a known public figure when he was one of the main leaders of dissident officers who occupied Plaza Altamira in Caracas. Three cell phones and various small arms were found with the general when he was arrested.

Gen. Rodriguez had been charged with being the mastermind behind the bombing attacks on the Spanish and the Colombian consulates in early 2003 and the murder of three soldiers and a woman, who had also participated in the Plaza Altamira disobedience. He is also being charged with military rebellion, for having been a part of the group of the about 150 dissident military officers.

Felipe Rodriguez had been said to be in Miami for much of the time since he was charged. In April 2004 he was interviewed by the Miami Herald while in hiding in Miami. In the interview he revealed that he was forming clandestine groups to overthrow Chavez. He denied, though, that he is guilty of the crimes he was being charged with. Venezuela had issued an extradition request for Rodriguez with the U.S. government.

Rodriguez’s lawyer, Carlos Bastidas, said that the arrest was done “with all due considerations and the respect that a division general deserves. The treatment he received at the military intelligence division (DIM) has been extremely good, considerate and respectful. His family could visit him. We were able to speak to him for a long while.” The bombings Rodriguez is being accused of took place two years ago, in early 2003, shortly after President Chavez accused Colombia and Spain of conspiring against his government. At the time, opposition leaders suggested that Chavez supporters had planted the bombs because of Chavez’s statements on TV. Other dissident soldiers later implicated Felipe Rodriguez.

The murders that took place around the same time as the bombings and involved three soldiers who had participated in the Plaza Altamira disobedience. The fourth victim was the girlfriend of one of the murdered soldiers. The murderers were apprehended over a year ago with the help of information supplied by a second girlfriend who the killers had left for dead. During the investigation of this crime, the accused killers implicated General Rodriguez as the one who gave the order for the murder of the three soldiers.

The initial charges against Felix Rodriguez had been made by the public prosecutor Danilo Anderson, who was killed in a car bombing assassination last November 18.