Riots in France: satisfaction of the warmongering press 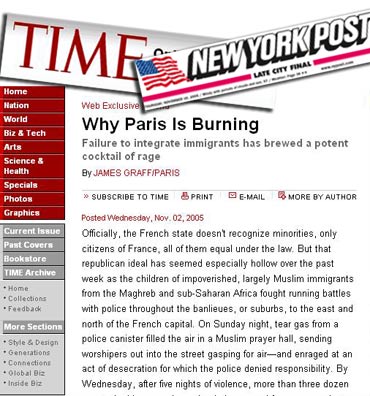 The Anglo-Saxon media outlets have widely covered the violence in the outskirts of France and have been as diligent as when they supported the war in Iraq and denounced France’s contrary attitude towards it.
While violent events in France involve adolescents and youths and have no popular or political nature, the media is using a catastrophic tone and an excessive military language. As such, the American magazine Time and the New York Post have raised the same question: (“Why is Paris burning?”), a title that makes reference to the Franco-American movie Paris brûle-t-il ? [Is Paris burning?] made in 1966 and directed by René Clément. The film is about uprisings in Paris against the Nazi occupation when the allied troops approached. The New York Post article is signed by Amir Taheri, expert of the neoconservative cabinet for foreign affairs Benador Associates. The Daily Telegraph also takes up a warlike metaphor by stating that Paris is burning. The conservative newspaper quotes an anonymous spokesperson from a police trade union indicating that the latest developments in France are the “worst since the Second World War”. Rupert Murdoch’s London Times prefers to announce that the uprisings are the result of “Muslim radicalism”.
In short, for the Anglo-Saxon militaristic media, France is facing a war against Islam that it is obliged to accept after refusing to fight against Iraq.