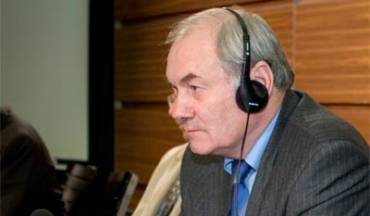 Russian General Leonid Ivashov thinks that it is necessary to create a second pole of influence to face US imperialism. This former head of the Joint Chiefs of Staff of the Russian army, who believes that the US hegemony and policies undermine the principles of the United Nations, would like the Axis for Peace conference, organized by Voltaire Network in Brussels on November 17 and 18, 2005, as well as the Shanghai Conference, to serve as the basis of a new intellectual pole in favor of peace and international law. “Having a second pole would be very important for the world. The Shanghai Conference is a possibility. Our two conferences could allow for the creation of a new political and intellectual pole to re-think international relations. Russia, which geopolitically speaking is in the middle of the road, could find its place there. Our country does not have a wish to expand its domination. On the contrary, it is now trying to put an end to the aggressions against Syria.”
The former head of the Department of General Affairs at the Defense Ministry of the Soviet Union, Leonid Ivashov, was the secretary of the Council of Defense Ministers of the Commonwealth of Independent States (CIS), then he was the head of the Military Cooperation Department of Defense Ministry of the Russian Federation and head of the Joint Chiefs of Staff of the Russian army. Currently, he is the vice president of the Academy of Geopolitical Affairs. The Russian General regretted the corruption that prevents political leaders to be at the service of their peoples: “The world is governed by people who are usually seeking personal wealth. Everywhere, governments and opinion leaders are bought. As to the media, they participate in the intimidation of personalities that could emerge. Russia also faces corruption within its institutions and we will do everything possible to get the corrupt ones out of our government.”