Reuters participates in a propaganda campaign against Iran 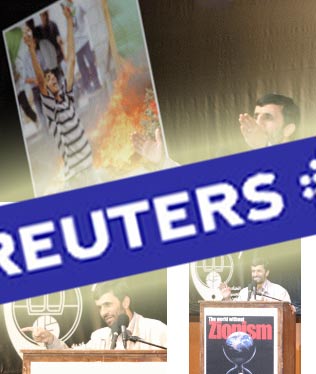 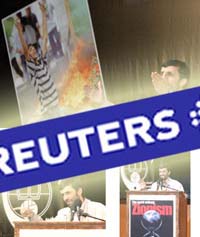 In order to justify a military operation against Iran, the neoconservatives have started to create a record. The have put a lot of effort into making people believe that this country is ruled by dangerously crazy people who are trying to make a nuclear bomb to be used. In view of such a danger, the only answer is to wage a preventive war.

Within this context, the U.S. press agency Reuters, one of whose representatives is, since the summer, a member of the War Room of the Pentagon, launched an insidious operation against Iran.

On October 26, 2005, Reuters wrote: “Iranian President Mahmoud Ahmadinejad said on Wednesday that Israel should be wiped off the map, the official news agency IRNA reported, dampening hopes Iran would temper its hostility toward the Jewish state. Support for the Palestinian cause is a central pillar of the Islamic Republic which officially refuses to recognize Israel’s right to exist. “Israel must be wiped off the map,” Ahmadinejad told a conference called "The World without Zionism," attended by some 3,000 conservative students who chanted "Death to Israel" and "Death to America."

Surprisingly, not many people thought of checking the original wire from IRNA “Ahmadinejad: Zionist regime bent on countering world of Islam”, IRNA, October 26, 2005]], that does not cite the words attributed to president Ahmadineyad. 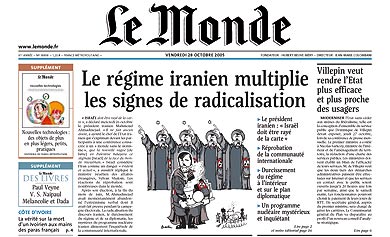 Based on Reuters wire, the international press talked about a radicalization of the Islamic Republic of Iran while the United States and the whole world reminded us that they recognize the State of Israel and its existence could not be questioned.

On this basis, Shimon Peres requested that Iran be kicked out of the UN, and the Israeli Foreign Minister, Silvan Shalom, compelled the Security Council to make a decision. In the light of Iran’s refusal, the Council limited itself to condemning president Ahmadineyad’s remarks [1].

Some States demanded explanations from Iranian Ambassadors and even got to call their Ambassadors in Tehran for consultation. However, the Iranian authorities, refused to render accounts, limited themselves to release the video of president Ahmadineyad’s speech. But since the later spoke in Farsi, the video was immediately broadcasted in the international networks as a confirmation of the words attributed, without further verification.

However, the facts are very different. President Ahmadineyad never said that he wanted to wipe Israel off the map, but he endorsed the statement made by imam Khomeini that someday the Zionist regime would be wiped from the map (see document below). There is therefore, no such radicalization of Iran, but the same position stated 25 years ago. Neither is there a threat from Iran to kill anyone, let alone to commit genocide against the Israeli people. There is only a position of principle to condemn the Zionism on the same basis as Iran condemns apartheid, racism and anti-Semitism.

Transcript of speech by president Mahmud Ahmadineyad at “World Without Zionism” conference of the Association of Islamic Students Societies, Tehran, October 26, 2005.

“I am grateful to God for giving me the great pleasure of speaking at this gathering.…

The creation of the regime occupying Al-Qods [Jerusalem] was a heavy move by the globally oppressor [United States] against the Muslim world. The situation has changed during the course of this historical confrontation. The Muslims have won several times, have moved forward and the oppressor has been obliged to retreat.

Unfortunately, in the past three hundred years, the Islamic world has been on the retreat. I do not intend to go to the roots of the issue and I concentrate on a historical review of the events. In the past one hundred years, the last trenches of the Islamic world fell and the Oppressor World created the occupying regime. The battle that is going on in Palestine today, therefore, is the frontline of the conflict between the Muslim world and the Oppressor World. It is a battle of destiny that will determine the fate of seven hundred years of conflict.

I must say that you have chosen a very valuable title for your gathering.

Many people, who are lost in this all-out war between the Muslim world and the Infidel Front, have tried to expand censorship and responsibilities. Such people say it is impossible to have a world without America and Zionism. But you know well that this is a goal and can definitely be realised!”

If we take a look back, we had in this country [here in Iran] a regime that was antidemocratic and armed to its teeth. Members of SAVAK [the Shah’s secret police] controlled every move and a terrible reign of terror existed. But when the dear Imam [Ayatollah Ruhollah Khomeini, founder of the Iranian Revolution] said this regime must be destroyed, many of those who claim to be political gurus and other things said it’s not possible. The day when the Imam Khomeini started his move, all the powers of the world supported that corrupt regime [of shah]. Even after the massacre on September 7, [1978], the West and the East and regional powers all supported the regime and continued saying that the regime was untouchable. But our nation fought and now for 27 years we have a government that is independent of America. Tyranny of the East and the West in the world must be destroyed, but weak-minded persons, who only see the little world around them, do not believe it.

Nobody believed that we would one day witness the collapse of the Eastern Imperialism. But in our short lifetime we have witnessed how this regime collapsed in such a way that we must look for it in libraries, and we can find no literature about it. The Imam said that Saddam must go, and that he would be humiliated in a way that was unprecedented. And what do you see today? A man who, 10 years ago, spoke as proudly as if he would live for eternity is today chained by the feet and hands, and is now being tried in his own country by those he believed to support him and also by those with whom he perpetrated his crimes....

Our dear Imam said that the occupying regime had to be wiped off the face of the earth. This was a very wise statement. The issue of Palestine is not an issue on which we can compromise. It is possible to create a new front from within an old one. This means defeat, and he who accepts the existence of this regime in fact signs the defeat of the Muslim world. In his battle against the World of Arrogance, our dear Imam set the occupying regime as the target of his fight. I do not doubt that the new wave which has begun in Palestine and which today we are also witnessing in the Islamic world is a wave of morality which has spread all over the Islamic world. But we must be alert and distrust the traps.

For more than 50 years, the World Oppressor has tried to give recognition to the existence of this occupying regime, and has taken steps in this direction to stabilize it. An important stage was reached 27 or 28 years ago. Regrettably, one of the countries of the first line made this mistake and we still hope that it will correct it [e.g. Peace treaty between Egypt and Israel] .

Recently, [the Israeli] have come up with a new stratagem. They pretend that the evacuation of Gaza strip, which was imposed by the Palestinians, was a victory…of the Palestine people. It would be a final victory for the Palestinian people that would lead to establish a Palestinian State just next to Israel. Today, they want to create conflict among Palestinian groups with their evil maneuvers and turn the struggle into an internal conflict by making them greedy for political positions, so that these groups abandon the decisive issue. With the excuse of having cleared the Gaza Strip to show their good will, they want a group of Muslim nations to recognize this corrupt regime. I am hopeful that the Palestinian nation and organizations will be cautious of such sedition.

I am hopeful that just as the Palestinian nation continued its struggle for the past ten years; it will continue to maintain its awareness and vigilance.

This will be a short period, and if we pass through it successfully, the process of the elimination of the occupying regime will be smooth and simple.

I warn all the leaders of the Islamic world to beware of this conspiracy. If any of them takes a step towards the recognition of this regime, then he will burn in the fire of the Islamic nation and will have eternal shame stamped on their forehead, regardless of whether they did this under pressure by the dominant powers, or lack of understanding or naiveté or selfishness or worldly incentives.

Those who are closeted behind closed doors cannot make decisions on this issue and the Islamic nation does not allow this historical enemy to exist at the heart of the Islamic world.

[1] “Press conference by the President of the Security Council about the Islamic Republic of Iran”, Reference SC/8542, October 31, 2005.

Ahmadinejad, the Unsinkable
"Before our very eyes"