Axis for Peace: The founding of an international movement against world domination

Leaders who oppose world domination by the Coalition met in Brussels on November 17 – 18, 2005. They were invited by Voltaire Network to attend the first Axis for Peace International Conference. Political leaders, diplomats, military officers and opinion makers spoke out based on their own experiences and facts, and not based on the issues represented by the Bush administration in the media. From this method and this freedom of speech, a new and original discourse has come up. The Axis for Peace 2005 conference is presented as the founding of a movement to redefine international relations and whose challenge is compared to that of Bandung in 1955. 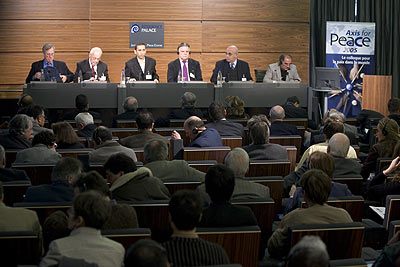 The Axis for Peace 2005 international conference, the first one of its kind, was held in Brussels between November 17 – 18, 2005. One hundred and fifty personalities from 37 countries responded to the invitation announced by Voltaire Network in order to elaborate an effective speech to defend peace.

Like a “rebellious Davos”, Axis for Peace is similar to Davos meetings because of the audience, which is made of political leaders, diplomats, military officers and opinion leaders. It is also similar to the World Social Forum because of the rebellious speech against the world order that has been established. For two days, the participants met under the chairmanship of Thierry Meyssan in panel and plenary sessions to assess the forms of interference and oppression in the world. They tried to distinguish the techniques used and think of common strategies to combat them.

On November 18, they signed a Final Declaration to denounce the coalition headed by the United States and the danger it poses to world peace. “A military coalition has plunged into a violent exploitation of energy resources and raw materials, participants stated. Encouraged by neoconservatives, it has increased its depredation and resumed all forms of interference, from the change of regimes to colonial expansionism. It is always violating the principles of international law drafted by the conferences of The Hague and stated in the San Francisco Charter”

“When the sovereignty of a state is violated, we are in the face of a terrorist act”

In the opening speech, former Lebanese Prime Minister Salim Al-Hoss recalled that peace could not be achieved by means of injustice and oppression. “Colonized countries see how their populations become hostages”. Then we cannot speak of peace” In order to clarify a debate undermined by the neoconservative rhetoric, Salim Al-Hoss stated: “Any person who takes up arms to defend the freedom of his people is considered a “terrorist”. In turn, we must clearly state that when the sovereignty of a State is violated, it is then a terrorist act”. 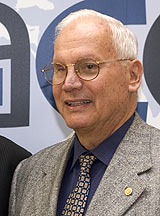 By refusing to label as “terrorists” the people and groups who resist the U.S. superpower, the former Ecuadorian army chief of staff, General René Vargas Pazzos, also stated: “If it is said that they are “terrorists”, we have to say that all wars are “terrorism”. Organizer of the conference to support the Iraqi resistance, the Iraqi Subhi Toma paid a vibrant tribute to his people that is currently resisting the oppression. When the conference was over, the peoples’ right to self-determination was reaffirmed. The Final Declaration of the Conference Axis for Peace solemnly urged the members of the UN Security Council “to see that the sovereignty of states be respected, based upon international law and indispensable condition for the development of a true democracy”. 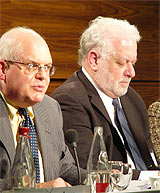 International Islamic terrorism was the topic of a round table discussion in which participants agreed on its fictitious nature and how it was being used as propaganda by the Coalition. Former German Minister Andreas von Bülow detailed the staging of the September 11 attacks in 2001. He explained how they took place in the very United States in order to legitimize the current military operations. U.S. journalist Webster Tarpley indicated that “it is impossible to understand the current U.S. policy if the real scope of September 11 is underestimated. The attacks perpetrated at that moment were a coup d’état. The war on terror is based on a myth and has become a compulsory state religion since such developments took place. The only way to fight against neoconservatives is by destroying this myth.” The former deputy attorney general of Pennsylvania, Philip Berg, explained that a great number of citizens in the United States did not believe in the official story of the September 11 attacks in 2001. Berg represents the families of the victims who “did not accept hush money” and denounced the Joint Chiefs of Staff and the White House for their responsibilities in the terrorist actions. 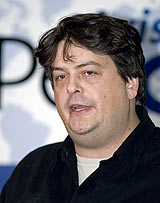 The implication of the Anglo-Saxon secret services in the creation and use of Islamic terrorism was presented by the former agent David Shayler. “I resigned from the British secret services when the MI6 decided to finance Osama bin Laden’s associates”, he said in an outstanding speech. “I tried to warn them but it was me who went to prison”, regretted Shayler, who explained that “this terrorism is coordinated by the MI6 and CIA”. The Final Declaration signed by the participants denounced how the Coalition is handling Islamic terrorism: “In order to justify its conquests, it creates and manipulates terrorist groups, fabricates excuses and propaganda about the theory of the world Islamic plot, and fosters a clash of civilizations”. The Coalition “hides its ambitions intoxicating the media and deceiving international institutions”, they stressed.

“The media is involved in intimidation”

The lectures tackled the issue of the various forms of interference, not only military but also political as well as cultural. General Leonid Ivashov, former chief of staff of the Russian armies, denounced the corruption of the political elite: “Everywhere, government and opinion leaders are bought. As to the media, it is involved in the intimidation of personalities who might emerge. Russia is also facing corruption within its institutions and we will do our best to isolate those who are corrupted out of our government” The media intimidation was the object of several debates. Across the globe, intellectuals, journalists or artists are ordered not to address certain issues, especially the Israeli policy, because they might be labeled as “anti-Semitists” and be excluded. The French comedian Dieudonné Mbala Mbala expressed his concern about the expansion of racism: “Today there is a generalized racism, a racist discourse that goes beyond what the extreme right wing would dare to go some years ago. The colonialism affecting the Palestinian people has ended up in the Zionist media as a racist discourse with no complex in today’s communitarianist treatment.” The chief-editor of Brecha, the major weekly newspaper of the Uruguayan left wing, Yvonne Trías, expressed her indignation about the accusations of anti-Semitism against intellectuals who oppose Israeli policy. “They put me on the black list of people who are considered as “anti-Semitists” by a Jewish intellectual”, she regretted. “My newspaper has been accused of anti-Semitism because it has criticized the Israeli policy. It has been the object of a major humiliating campaign. We have been treated as “anti-Semites” and even as “negationists”. When the campaign started, we received pressures from everywhere. There was an avalanche of e-mails. There were readers who said they would cancel their subscription. Left wing people came to suggest that we should give up our criticisms”. The meeting of personalities from the different continents allowed to see that the methods of media intimidation prevail in different parts of the world.

“There is still time to unite for peace” 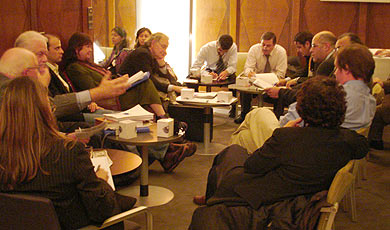 Meeting between Syrian and US personalities beside the conference hall

During the round table on Syria, participants compared the accusations made against this country regarding the assassination of Rafik Hariri to the “evidences” of the Iraqi weapons of mass destruction presented by Colin Powell to the UN Security Council. In the Final Declaration, participants denounced that “France, which had opposed the invasion on Iraq, had backed the threats against new preys” and welcomed Russia’s mediation which defends the implementation of the nuclear non-proliferation treaty and presumption of innocence in international relations”.

“On our part, they continued, we commit to mobilize public opinion, based upon the example of what Latin Americans are already doing, to derail the propaganda and hatred, and to reject the global project of domination and exploitation”. 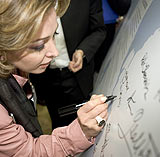 At the end of the debates, participants were invited to sign the Final Declaration

When the conference Axis for Peace was over, the representatives from the United States and Syria spontaneously decided to arrange a common meeting. “How to prevent a war between our two countries?”, they asked. During this working meeting that lasted until late in the evening, participants analyzed how this issue is perceived in their respective countries, from the political leader’s point of view as well as that of the public opinion. The personalities from the United States and Syria worked together to find the means to bridge the gap between their countries.

“There is still time to unite for Peace” endorsed the Final Declaration of Axis for Peace signed some hours ago.

The official site of Axis for Peace: www.axisforpeace.net

Photos of the conference with high resolution: www.axisforpeace.net/rubrique13.html

Follow-up on the conference in Voltaire Network site: www.voltairenet.org/rubrique30009.html