In a $230 million agreement designed, in part, to help promote regional integration, Venezuela and Colombia have agreed to build a gas pipeline between the two countries. Venezuela’s President Hugo Chavez and Colombia’s Álvaro Uribe made the announcement yesterday, while they met at the oil refinery complex of Paraguaná, on Venezuela’s northeastern coast. 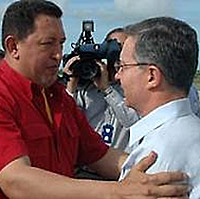 The pipeline will run approximately 134 miles, from Colombia’s Puerto de Ballena to the East Coast of Venezuela’s Lake Maracaibo. The project will begin in the first quarter of 2006 and be completed within two years. “Venezuela will be the owner and operator of the pipeline. It will, of course, charge a tariff on the initial export of gas from Colombia to Venezuela, and later from Venezuela to Colombia,” said Colombian President Álvaro Uribe.

For the first seven years of the pipe’s operation, Colombia anticipates pumping 4.24 million cubic meters of natural gas into Venezuela daily, a quantity which Venezuelan Foreign Minister Ali Rodriguez estimates to be worth more than $153 million a year. Afterwards, when Colombia runs out of natural gas reserves, the pipeline is planned import gas to Colombia from Venezuela.

Both presidents touted the deal’s importance to regional integration. It is part of PdVSA’s Plan Siembra Petrolera (Plan for Sowing the Oil), a development project with regional integration as one of its six main goals. The project represents about 1.4 percent of Plan Siembra’s budget over the two years of the pipeline’s construction.

In a second phase, the presidents say, the pipeline will be connected to pipelines in Central America. “We have to connect ourselves not only to Central America, but also from Colombia to the South, to the Pacific Ocean, to Ecuador, Peru, and Bolivia, with a natural gas pipeline of 6,000 kilometers,” added President Chávez.

Despite the two leaders’ dissimilar politics, disagreements over the value of the Free Trade Area of the Americas (FTAA) agreement, border problems, and a brief diplomatic rift over the arrest of a Colombian guerilla in Caracas, the two countries have maintained relatively good relations. The gas pipeline agreement is seen as further evidence of close ties between the countries.

According to the Venezuelan daily Panorama, in a related announcement, Uribe said that Colombia has agreed to allow PdVSA to construct an oil pipeline across the country in order to allow Venezuela to increase its oil sales to Asia. Oil exports are critical to both the Venezuelan and Colombian economies. However, Colombia’s state-owned oil company’s agreements with private companies have been controversial, provoking long-term attacks by guerilla groups and international campaigns to supporting indigenous groups effected by environmentally destructive pipelines.

When the meeting between Chavez and Uribe concluded today, Colombia’s Foreign Minister Carolina Barco told the press that the meeting was highly satisfactory and that the two presidents had a “constructive dialogue.” According to Barco, Chavez promised to visit Colombia in December.

Chavez: Venezuela to withdraw from Andean Community of Nations

Venezuela and Paraguay Agree to Oil Deal during Chavez’s Visit