A major Venezuelan oil pipeline was bombed the night before Venezuela’s elections. The President of Venezuela’s state petrol company PDVSA, Rafael Ramirez, said groups, “trying to create a climate of violence in our country were involved in this.” 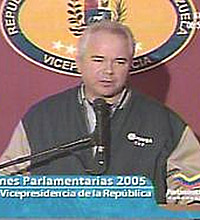 The bomb destroyed part of the Ulé-Amuay oil pipeline at 9:30 pm on Saturday night. The pipeline goes from the center of Venezuela’s oil industry, Lake Maraicaibo, to Paraguana. The Paraguna oil complex is the world’s largest oil refinery.

Ramirez said that a large fire was created by the bomb but that it was quickly put out. The pipeline normally supplies the Paraguana refinery with 400,000 barrels of oil a day. Ramirez said within two days the pipe should be fixed. Production should not be interrupted as the refinery had 5 days worth of oil to process when the attack took place.

Ramirez blamed opposition activists. The PDVSA President said, “The same people behind the oil sabotage three years ago… are trying to create fear in our country.” The Venezuelan Minister of the Interior, Jesse Chacon said his ministry, “knows who is behind this situation, and we have made some arrests.”

In the lead up to the election, a series of small bombs exploded in the Venezuelan Capital of Caracas, injuring several. Government officials said many Molotov cocktails had been confiscated before elections on December 4.

Even though there was a low turnout for Sunday’s vote, Chacon said the elections showed, “Venezuelans said ’no’ to violence today.” It is anticipated that there will be more violence in Venezuela in the lead up to the Presidential elections in 2006.