Fear of Putin made the Chechens vote for him, according to an analysis by “Le Figaro” 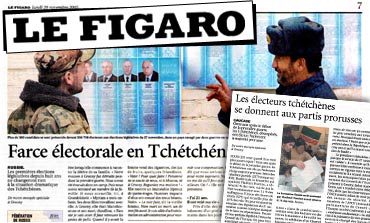 Le Figaro, newspaper of the French right wing, does not differ from Atlantist newspapers: invectives are hurled in view of the re-establishment of the electoral process in Chechnya.

Its edition dated November 28, 2005 bears the headline “Electoral farce in devastated Chechnya”. The article by the special envoy to Grozny, Irina de Chikoff, did not try to defend pro-independence advocates, who have no popular base, but to put them at the level of security forces. They would all be just butchers and the population their victims.

A switch in November 29 edition: Russia United, the party of President Putin obtained 61% of the votes, and if there was fraud, it does not matter. Upset, the newspaper came up with the headline “Chechen voters give up to pro-Russian parties”. The use of the term “pro-Russian” reflects the Atlantist opinion that Chechnya could not be Russian, but colonized by the Russians.

”The results could be contested as the separatists did. Its perfect legality questioned as the European Council did. It could also be admitted that they reflect, in the current context, the will of a population that is fed up, disappointed, profoundly hurt”, wrote Irina de Chikoff. In other words, it is not necessary now to say that Vladimir Putin is a tyrant, and pretend that Chechens hate him. On the contrary, the fact that the population voted massively for his party is obviously evidence of how fearful it is. For Atlantists, the only acceptable sign of democracy is voting for pro-American parties. 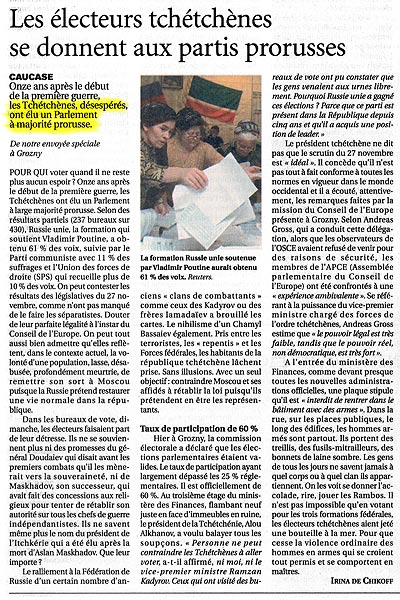 Source : “Fear of Putin made the Chechens vote for him, according to an analysis by “Le Figaro””, Voltaire Network, 15 December 2005, www.voltairenet.org/article132633.html

For “Libération”, in Beslan, all Russians are culprits or accomplices

“God, nobody knows what happened?”

“Just the fact of meeting with Basáyev triggered rage”

Source : “Fear of Putin made the Chechens vote for him, according to an analysis by “Le Figaro””, Voltaire Network, 15 December 2005, www.voltairenet.org/article132633.html