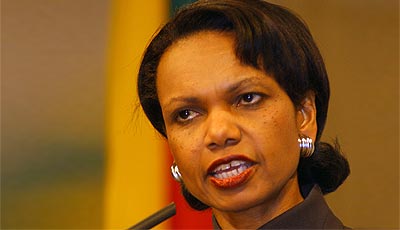 The recent visit paid by the US Secretary of State, Condoleezza Rice, to Bucharest and within this context, the signing of the Romanian - American Agreement on military bases established in that country, are a concern for Moscow, which always follows closely any change that might affect its interests in the region that might be considered highly strategic. The US has, therefore, recognized that it had informed Moscow in advance about its plans to establish its military bases in Romania.

However, such precautions did not prevent the Russian authorities from expressing the dissatisfaction of their country through the voice of deputy prime minister Sergueï Ivanov, minister of National Defense, who brought up the issue pertaining to the validity of the Conventional Weapons Treaty in Europe. According to an official US representative who wishes to remain anonymous, the future bases of his country in Romania pose, on the one hand, no threat to Russia, and on the other hand, the Agreement respects the clauses set out in the European Treaty. The same happened with what resulted from the agreement signed between NATO and Russia, which did not calm down Russia.

The “orange power” of Bucharest is, therefore, willing to put the country at the service of the United States for it to establish as many military bases as possible provided the US duly pays for them. This statement was made by the authors of a sharp article issued in yesterday’s edition (December 8, 2005) of the newspaper Rossiiskaya Gazeta, rightly considered a media source close to the government. When analyzing the forthcoming establishment of military bases in Romania, the newspaper recognized, among other things, that this Agreement is something new in the history of relations between the US and Europe, since it is the first time that the United States will establish a base on the Black Sea, near the border between the Ukraine and the Republic of Moldavia, just a few kilometers away from Crimea. The author of the Russian article maliciously recalled the environment with “veneration and respect” as well as the statements for “friendship without limits and fraternity between both peoples” that were made during the visit of the Secretary of State. And he concluded by pointing out that in order to create a situation in which the “United States would feel itself comfortable in Romania”, Bucharest gave up to the right to try US forces charged with crimes committed on Romanian soil.

This article was initially published by the Romanian newspaper Adevàrul ("The Truth") # 4801, December 9, 2005.

Source : “Bucharest has decided to put Romania at the service of the United States”, by Vasile Buga, Voltaire Network, 12 January 2006, www.voltairenet.org/article133643.html

Source : “Bucharest has decided to put Romania at the service of the United States”, by Vasile Buga, Voltaire Network, 12 January 2006, www.voltairenet.org/article133643.html