Torture: A Defining Moment for McCain...and for the Rest of Us Too

Under the neo-conservatives’ thumb, the United States have legalized the use of torture for the first time in their history. An amendment by Senator McCain (Rep.), which aim is to bring the country back to compliance with international law, is currently being discussed in Congress. Ray McGovern, the spokesperson for a group of former intelligence officers, has lent his support to this initiative. He explains the Voltaire Network readers that the heart of the matter for U.S. representatives is not to find a compromise between national security and human rights, but it is rather about defending – or forgetting - Democracy’s core values. 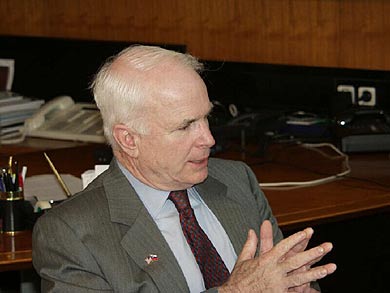 Sen. John McCain and his Senate colleagues have provided Congress a chance to redeem itself in a small but significant way for its craven abdication of responsibility three years ago, when it gave the president what Sen. Robert Byrd warned would be a “blank check” for war on Iraq.

With some remarkable help from then-White House Counsel Alberto Gonzales and hired legal hands at the Justice Department, Vice President Dick Cheney and Defense Secretary Donald Rumsfeld stretched that blank check to include authorization for torturing detainees by CIA and U.S. military personnel. McCain, himself a victim of torture in Vietnam, is trying to bring the U.S. into compliance with international norms, while the Bush administration is trying desperately to leave the door open for CIA and contract interrogators to act beyond those norms without threat of prosecution.

McCain has tacked onto the defense authorization and defense appropriation bills an amendment that would require Defense Department personnel to observe the strictures in the Army Field Manual for Intelligence Interrogation. As for CIA and other non-defense department personnel, the amendment would prohibit “cruel, inhuman, or degrading” treatment of detainees “regardless of nationality or physical location.” Cheney has been waging an open campaign to defeat or alter the amendment. He lost the first round when, despite Herculean efforts on his part, 89 senators joined McCain in voting for it.

This presents a direct challenge to Cheney, and to the president whom, one assumes, is being kept informed. The House versions of the defense bills do not include the McCain language, so final agreement on the torture provision is now in the hands of conferees from the House and Senate working to resolve differences between the bills. On Monday, President George W. Bush said he was “confident” that agreement could be reached with McCain, but Democrat Sen. Carl Levin said the House so far has refused to accept McCain’s language and that this was “unacceptable” to the Senate. Yesterday’s lopsided vote in the House to instruct House negotiators to include McCain’s language, word for word, will make it still more difficult for the White House to prevail.

The defense bills are must-pass legislation, so Cheney and Bush may have to weigh whether to go through with their oft-stated threat to veto. This, of course, would precipitate a worldwide public relations disaster, but that kind of consideration has not deterred such action in the past. Besides, even if they care about the U.S. becoming even more of a pariah abroad, Bush and Cheney may harbor the forlorn hope that spinner-in-chief Karen Hughes can deal with that. And, sadly, they may also be encouraged by recent polling suggesting that many Americans have become fearful enough to accept torture as regrettable but permissible in use against “suspected terrorists.”

No effort has been made to disguise what is behind the opposition to McCain. Even Republican Sen. Lindsey Graham, a lawyer who has been considered a moderate on the issue of torture, has conceded that the “problem” is to find a way to protect interrogators who go too far. To this non-lawyer at least, it does not seem possible to square this circle. I am still trying to accustom myself to the fact that, alongside the “we-do-not-torture” rhetoric, our country has for the first time in its history openly embraced the use of torture.

Who Will Blink; Cheney or McCain?

Supporters of the Cheney school of thought have been taking to the airwaves using the bogus “ticking-bomb doomsday scenario” rationale to, well, rationalize torture. And this seems to be having some impact. According to an AP-Ipsos poll conducted in late November, 61 percent of Americans surveyed believe torture is justified at least on rare occasions; only 36 percent said it can never be justified. A January 2005 poll conducted by Poltronics involving over two thousand telephone interviews found that 53 percent of Americans thought some torture is acceptable, with 37 percent opposed. That poll also found that 82 percent of FOX News Channel viewers said that torture is acceptable in “a wide range” of situations.

And so, incredible though it may seem, torture survivor McCain runs the risk of appearing soft on torture with the Republican base, whose support he will need if he hopes to win the Republican nomination in 2008. Accordingly, despite the strong support he enjoys among Senate colleagues and despite his uncompromising stance until now, there is still a chance that McCain will acquiesce in compromise wording—words that would enable the administration to assure CIA and contract interrogators that they will enjoy immunity from prosecution if they keep “the gloves off,” as erstwhile CIA counterterrorism chief Cofer Black described the CIA’s approach post 9/11.

>From the administration’s point of view, “enhanced interrogation techniques” have certainly come in handy in promoting the war in Iraq and the “war on terror.” We now know, for example, that the bogus information included in President Bush’s key speech of October 7, 2002, just three days before the Congress voted on the war, about Iraq training al-Qaeda operatives in explosives and chemical weapons was extracted from the captive Ibn al-Shaykh al-Libi by the Egyptian interrogators to whom we “rendered” him. Al-Libi has since recanted, claiming his statements were coerced.

And when then-Attorney General John Ashcroft needed to advertise a success in the “war on terrorism,” José Padilla was produced on the basis of the testimony of none other than 9/11 mastermind Khalid Shaikh Mohammed, whose interrogation included waterboarding. Padilla’s “dirty bomb” charge was dropped after he spent over three and a half years in prison.

My colleague Veteran Intelligence Professionals for Sanity and I can scarcely believe what we are watching. While I admire Sen. McCain for taking a stand, it strikes me as odd, for example, that he cites damage to the U.S. image abroad as the primary reason why torture should be banned. Our tarnished image is a serious problem, but it is, in my view, among the least compelling of a long list of reasons to throw torture out of our toolbox. Others that come to mind, in ascending order of importance, are:

Torture puts our own troops, as well as those of other countries, in jeopardy of “reciprocal” treatment.

Torture brutalizes not only the victim but also the brutalizer. (Talk, as I have, to those who took part in, or merely witnessed, torture in Iraq or Afghanistan.)

Information acquired by torture is notoriously unreliable. Experienced interrogators know that torture is as likely to yield misinformation as accurate information, since torture victims will say anything to stop the pain. In the past, torture fell into disuse primarily because it did not work.

A Corollary of “The Supreme Crime”

The use of torture before and after the invasion of Iraq points to an even larger crime; namely, the attack on and occupation of Iraq for reasons other than those given. The war is, pure and simple, a war of aggression. The post WW-II Nuremberg Tribunal, largely a creature of the United States, declared:

“To initiate a war of aggression...is the supreme international crime differing from other war crimes in that it contains within itself the accumulated evil of the whole.”

UN Secretary General Kofi Annan has called the war illegal, as have the International Commission of Jurists and the preponderance of legal experts around the world. As for the “accumulated evil of the whole,” torture comes immediately to mind. There is no getting around it. Torture is a war crime; a crime against humanity. And, assuming the polls have it right, also part of the “accumulation” is the fact that a majority of our fellow citizens have been frightened into believing that it is permissible to dehumanize others to the point of torture.

Our country’s leaders, including those who represent us in Congress—indeed, all of us—must open our eyes and step out of what Nazi war criminal Albert Speer called “moral contamination.” We are only too willing to close our eyes and let our institutions do our sinning for us.

At the Nuremberg Trial, Speer, number three in the wartime Nazi hierarchy, was the only defendant to accept full responsibility not only for his own actions but also for those of the regime. Speer confessed that he had become “inescapably contaminated morally:”

“I did not see because I did not want to see...there is no way I can avoid responsibility...It is surprisingly easy to blind your moral eyes. I was like a man following a trail of bloodstained footprints through the snow without realizing someone had been injured.”

Last week, 33 of us retired intelligence officers sent a letter to Sen. McCain expressing strong support for his amendment to reinforce the ban on cruel, inhuman, and degrading treatment of detainees by US personnel around the world. McCain’s office has distributed the letter widely on the Hill, and a press release was issued, but so far mainstream media seem to have missed it. The letter says, in part:

“Those who press for ‘flexibility’ to abuse prisoners have been willing to forsake both effectiveness and our values as a nation on the misguided belief that abusive treatment will produce vital intelligence. But interrogation in the real world rarely resembles what we see on television and in the movies...Thankfully, the choice between our values and success against the terrorist enemy is a false one. We must not be seduced by the fiction that adherence to our ideals is what stands between our great nation and the security it deserves.”

Much depends on whether Sen. McCain will stand on principle and resist watering down his amendment. Such a display of integrity would certainly set him apart these days in Washington.

Source : “Torture: A Defining Moment for McCain...and for the Rest of Us Too”, by Ray McGovern, Voltaire Network, 16 January 2006, www.voltairenet.org/article133804.html

U.S. Army veteran and CIA analyst for 27 years. He is now a member of the Steering Group, Veteran Intelligence Professionals for Sanity (VIPS).

Source : “Torture: A Defining Moment for McCain...and for the Rest of Us Too”, by Ray McGovern, Voltaire Network, 16 January 2006, www.voltairenet.org/article133804.html