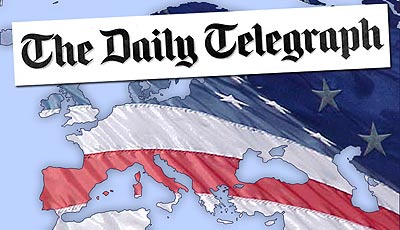 In its edition dated December 5, 2005, the very conservative British newspaper Daily Telegraph, published its editorial entitled (“ Regime change is needed in Europe”). Released the first day of the visit by the U.S. Secretary of State Condoleezza Rice to Europe, the text claimed that Washington had to put pressure on EU to become more democratic.
Based upon the postulate under which the United States sincerely wants the world to become more democratic since Bush administration took power, the newspaper indicated that the main obstacle to the U.S. policy was the European attitude towards countries targeted by Washington. The Daily Telegraph feels that such contempt by the EU for democracy is a cultural problem of European leaders and Washington should try by all means to change the way the EU operates.
The newspaper failed to clarify what means would be used to achieve such a purpose and gaily mixed the problem of the lack of transparency and democracy in European institutions, and the alleged contempt of the European Union for democracy at world level. Anyway, the actual problem does not seem to be this one. When claiming that the real objective of Condoleezza Rice’s tour across Europe is democracy in the European Union or differences between Brussels and Washington regarding issues like Cuba, Iran, Iraq, Israel, China and the UN, the Daily Telegraph consciously hid the real issue of the controversy: the existence of CIA centers for torture in Europe.
The British newspaper thus avoided raising this matter, which revealed the duplicity of the pro-democratic U.S. discourse and submission of European countries, and called for more European obedience to the United States in the name of those widely trampled grand principles.