Is it necessary to burn Hugo Chávez?

An organization for the defence of human rights, the Simon Wiesenthal Centre, and French journals Libération and Le Monde continue to spread defamatory accusations against Venezuelan President Hugo Chávez, calling him an anti-Semite. Clearly acting in bad faith, they manipulated a mutilated statement in an effort to discredit a political figure that has emerged as an anti-imperialist reference for Latin American progressive movements as well as within the Organization of Petroleum Exporting Countries (OPEC). 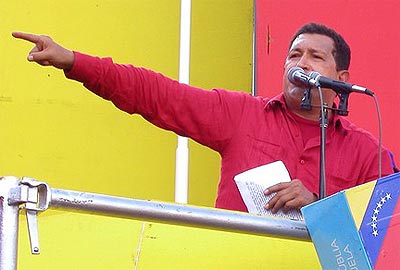 On January 4th, 2006, the Simon Wiesenthal Centre, the main Jewish organization for the defence of human rights, sent a letter to Venezuelan president Hugo Chávez Frías demanding a public apology from the leader for having made anti-Semitic comments. At the same time, the centre wrote to the presidents of Argentina, Brazil, Paraguay and Uruguay urging them to block Venezuela’s process of integration to the South American Common Market (MERCOSUR) until Hugo Chávez extended his apology in public. [1]

Immediately, the correspondent of Reuters news agency in Caracas published a report. However, he acted with caution saying that the official transcription of the President’s words did not match the quote published by the Wiesenthal Centre and then reproduced the text. The English version of this report, published 15 hours later, was re-written by the direction. It no longer reproduced the quote and the journalist noted that President Chávez did not speak of the Jews but suggested that he expressed his anti-Semitism in a reference. [2].

In Argentina and Venezuela, journals of the extreme right retake the communiqué of the Wiesenthal Centre but, due to the exact quote transmitted by Reuters, most of the newspapers abstain and the controversy declines. The US radio station Voice of America then made another attempt. This station of the US State Department only spread the version of the Wiesenthal Centre and carefully avoided any reference to the quote [3]. But there was still no reaction.

Finally, it was the French journal Libération, owned by Edouard de Rothschild, the one that was able to create a relatively daring controversy quoting President Hugo Chávez’s words... but mutilating them [4]. To reinforce the accusation, Libération adds that, during a year, the Venezuelan President had as an advisor Argentinean sociologist Norberto Ceresole, presented by the French journal as a revisionist and a supporter of the military dictatorship.

The French journalist who signs the article, Jean-Hébert Armengaud, is very well known for his opposition to the Bolivarian Revolution and to all Latin American progressive regimes and he is the author of articles against the policies of Fidel Castro and Jean-Bertrand Aristide.

Armengaud’s article was then retaken by Associated Press and later by Le Monde [5]. The defamation is on its way.

According to the Simon Wiesenthal Centre, President Chávez said: “The world belongs to everybody, but some minorities, the descendants of those who crucified Christ, took over the riches of the world ”, words that would be retaking the eternal anti-Semitic reproaches accusing the Jews of simultaneously having killed God and of hoarding riches.

According to Libération, President Chávez identified the “owners of the world” by saying that: “Today more than ever we miss Christ (...), but it turned out that a minority, the descendants of those who crucified Christ (...) took possession of the riches of the world (...) and concentrated these riches in the hands of a few ”.

Neither the Wiesenthal Centre nor Libération cite the circumstances in which these words were said and they don’t specify to which audience they were addressed either.

Actually, Hugo Chávez Frías said these words on Christmas Eve before a leftist Catholic association and what he said was: [6].

Questioned by Voltaire Network, the Director of the Wiesenthal Centre of Buenos Aires, Sergio Widder, admitted that “there is a margin of ambiguity in his comments” (Telephone interview with Sergio Widder, January 9, 2006.]]. Mr. Widder admitted that:

President Chávez was not speaking of Jews, neither explicitly nor implicitly.

The Liberation theologians who run the [7], where President Chávez made the comments on Christmas Eve, do not blame the Jews from Christ’s death but the Roman Empire and they develop a spirituality according to which Christ showed the way for inner and political liberation in front of imperialism.

The minorities that President Hugo Chávez stigmatized as groups that have the same intentions as those who killed Christ were the Venezuelan leading class who expelled Bolívar and left him to die in Colombia and today’s world system that concentrates the riches in the hands of 10 percent of the world population.

Nevertheless, Mr. Widder partially maintained his accusations saying that the important thing is not what President Chávez said but what could be understood and added that a leader of his stature has to express himself clearly, leaving no room for ambiguity. Mr. Widder admitted, however, that President Chávez’s speech was clear for those listening to him and said that he could not name any other case of a group, apart from the Wiesenthal Centre, interpreting the words of Hugo Chávez as an expression of anti-Semitism. Mr. Widder also noted that the Wiesenthal Centre does not make comments about President Chávez’s policies.

What it is all about

In the absence of serious foundations, this controversy reflects precise and important objectives. Far from being only a Jewish association for the defence of human rights known for having successfully developed the hunt for Nazi criminals, the Simon Wiesenthal Centre has also turned into an organization that supports Israeli policies. That is why, even though Voltaire Network is proud of having acted along with the Simon Wiesenthal Centre in the struggle against the resurgence of anti-Semitism, we cannot accept as good all its declarations.

In the mid 1980s, the Centre organized colloquiums on terrorism that were actually stands against Palestinian resistance. Early in the 1990s, the Centre released a completely false report accusing French and German companies of having provided Saddam Hussein with poisonous gases to use them against the Iraqi people. In 1992, the Centre carried out a campaign in favour of Bosnian leader Alija Itzetbegovic and in favour of NATO’s intervention. However, Itzetbegovic is a former Nazi militant who has the support of Israel. Currently, the centre is actively supporting actions against Iran. In the front page of its website, the Centre promotes trips to Israel that include meetings with “present and future Israeli leaders” and a visit to a military base in Tsahal.

In its communiqué about the words attributed to President Chávez, the Centre compares him with Iranian President Mahmud Ahmadineyad. Being more direct, Libération recalls that Ahmadineyad’s first trip abroad will be… to Venezuela, where he will be welcomed by President Chávez. The French journal also makes reference to the case of Norberto Ceresole, a former advisor to Chávez, underlining that he was a revisionist - Libération abstains from noting that it was precisely because of Ceresole’s revisionism that Hugo Chávez dismissed him [8] - and that Ceresole also worked as an advisor to Iranian leaders. Thus, Ceresole played a key role in the rapprochement between Venezuela and Iran within the Organization of Petroleum Exporting Countries (OPEC).

In other words, in times when the United States and Israel are preparing a military aggression against Iran and try to isolate that country in the diplomatic field, the Wiesenthal Centre resorts to lies to accuse President Chávez of being anti-Semitic and to try to isolate him too.

In order to guarantee the support of the US State Department, the Wiesenthal Centre includes an attempt to block Venezuela’s integration to MERCOSUR, in an effort to giving momentum to setting up of the Free Trade Area of the Americas (FTAA), a project that US President George W. Bush unsuccessfully tried to impose during the last Summit of the Americas in Mar del Plata. The defamatory accusations launched by the Simon Wiesenthal Centre are the continuation of a long list of media campaigns orchestrated against President Chávez, who has been described as a “dictator”, “fascist”, “populist” and a “pro-coup” leader by Atlantist media outlets, which have never been able to prove such slanderous allegations.

We regret that the Simon Wiesenthal Centre, whose actions against the Nazis are admired, is joining this type of campaigns and thus compromising the struggle against anti-Semitism and reducing it to the category of a mere political manoeuvring in favour of Israeli interests.

[6] “The world has an offer for everybody but it turned out that a few minorities - the descendants of those who crucified Christ, the descendants of those who expelled Bolivar from here and also those who in a certain way crucified him in Santa Marta, there in Colombia – they took possession of the riches of the world, a minority took possession of the planet’s gold, the silver, the minerals, the water, the good lands, the oil, and they have concentrated all the riches in the hands of a few; less than 10 percent of the world population owns more than half of the riches of the world ”, Hugo Chávez Frías, December 24, 2006.

Media concentration in France
Information, a merchandise submitted to the rules of market

Empire
The superpower without complex

NATO: an alliance for freedom
From the Cold War to the War on Terror