In Defence of International Law

A figure of the anti-imperialist movement, Jean Bricmont, opened the round table discussion on humanitarian interference during the conference Axis for Peace 2005. In this text, taken from his most recent book, “Impérialisme humanitaire. Droits de l’homme, droit d’ingérence, droit du plus fort?” (“Humanitarian imperialism. Human rights, right of interference, law of the strongest? ”), he explains that peace can only be based on international law and that the right to interfere, like the manipulation of human rights, serves as a disguise for the law of the jungle. 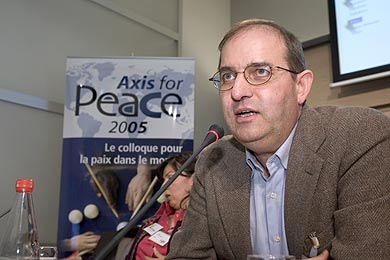 As Canadian jurist Michael Mandel perfectly explains, contemporary international law aims at, citing the introduction of the United Nations Charter, “protecting future generations from the scourge of war.” The basic principle to achieve this is that no country has the right to send its troops to another country without the approval of the government of the latter. The Nazis did it repeatedly and the first charge they faced in Nuremberg was aggression, a crime that “contains and makes the others possible.”

“Government” does not mean here “elected government” or “respectful of human rights” but simply that “effectively controls the armed forces” because that is the element that determines if a war breaks or not when borders are trespassed. It is easy to criticize this basic principle and those who defend human rights do not abstain from doing so. On the one hand, it often happens that the states’ borders are arbitrary as they are the result of old processes that were completely undemocratic and because many ethnic minorities do not agree with those borders. On the other hand, nothing guarantees that governments are democratic or that they care at least a bit about the well being of their people, but the goal of international law is not to solve all problems. Practically like all other laws, it tries to be the lesser evil in the absence of law, and those who criticize international law should explain the principles they recommend to replace it. Can Iran occupy Afghanistan? Can Brazil, as democratic as the United States, invade Iraq to establish a democracy there? Can the Congo attack Rwanda in self-defense? Can Bangladesh interfere in the US internal affairs to impose a reduction of Washington’s emission of greenhouse effect gases and thus “prevent” the damages to which that country is exposed because of global warming? If the US pre-emptive attack against Iraq is legitimate, why weren’t the attacks by Iraq against Iran or against Kuwait as legitimate as well? Even worse, why wasn’t the Japanese attack against Pearl Harbor a legitimate pre-emptive attack? When we ask these questions we realize that the only realistic alternative to the currently existing law, apart from a generalized chaos, is the possibility of the most powerful nation of the world to intervene wherever it pleases to, or to authorize its allies to do it.

However, all liberal thinking since the 17th century is based on the idea that there are three ways to live in society:

1. War of all against all;
2. An absolute ruler, who imposes peace through force;
3. A democratic legal order, as the lesser of evils.

Dictatorial regimes, denounced by those who defend human rights, have the advantages of an absolute ruler: they preserve order and avoid the war of all against all. Their current expression is the so-called “failed states”. The inconvenient is well known: the ruler acts according to his own interests and those under his rule do not accept his authority; this causes an endless cycle of uprisings and repression. This situation is the very basis for the defence of the third solution.

What has been previously said is considered vain in the discussion about the internal order of democratic states. Let us see now the international order. The ruler, if we had to ignore the principles of the existing international law, would inevitably be the United States. This country clearly acts in its own interests. We have to note that the supporters of interference not always deny this assertion; but then they argue, making a very selective interpretation of history, that their behaviour brings humanity more benefits than evils. I do not share this opinion although, anyway, the adverse consequences of exercising this absolute power certainly match what a classic liberal would expect: Bin Laden, for example, is the result of the support given to the mujaidins in Afghanistan during the Soviet era; on the other hand, by selling weapons to Iraq, the West significantly helped the current Iraqi resistance.

In 1954, the United States overthrew Arbenz in Guatemala. They did it, apparently, without any efforts or risks for themselves. But, by doing so, they contributed to the political formation of a young Argentinean doctor who was there and whose picture is very well known around the world today: Che Guevara. 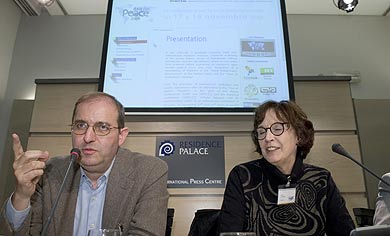 During the Conference of Versailles, after World War I, a young Vietnamese nationalist came to Europe to defend the cause of his people’s self-determination before Robert Lansing, State Secretary of the man who presented himself at that time as the champion of self-determination: US President Wilson. The young Vietnamese was ignored. What risk could he pose? He then went to Moscow to improve his political instruction and he became famous: his name was Ho Chi Minh.

Who knows what the hatred caused by US and Israeli policies will bring in the future?

In the international order, the third solution, the liberal one, would consist of providing more democracy at a world level through the United Nations. Bertrand Russell would say that speaking about the responsibility of World War I would be like discussing about responsibility in a car accident in a country without driving regulations. The idea that international law should be respected and that conflicts among states should be solved by an international organization was a crucial advance in the history of humanity, similar to the abolition of the monarchic power and aristocracy, the abolition of slavery, the development of freedom of speech, the recognition of union and women’s rights and even the idea of social security.

It is clear that the United States, and also those who support the actions of that country in the name of human rights, oppose the strengthening of that international order. It is very likely that the UN reforms currently being studied will lead to the legitimization of more unilateral actions. According to the argument most commonly used, it is an outrage to put democratic and undemocratic countries at the same level in the United Nations and particularly in its human rights commission. This argument ignores that in all the meetings of the Movement of Non Aligned Countries and in all the summits of the South, who represent 70% of humanity, they – not only “dictatorships” – have condemned all forms of unilateral interference, namely embargos, sanctions or wars. Anyway, liberal imperialists, that is, the majority of US Democrats and most of the European Greens and Social-Democrats – who defend democracy at the internal level while they support interference, that is, the dictatorship of a country or a small group of countries, at the international level – are completely incoherent.

Finally, when complaining, as it often happens, about the inefficiency of the United Nations, we have to think of all the disarmament treaties or accords prohibiting weapons of mass destruction, whose main opponent is the United States. It is precisely the big powers the ones that more firmly oppose the idea of law acting against their last resort: the use of force. But, in the same way that no one suggests that, at the internal level, the mafia’s hostility towards law can justify the abolition of the latter, no one can use the US’s sabotage of the United Nations as an argument to discredit this organization.

There is one last argument in favour of international law that may be even more important than all the others: international law is the paper shield that the Third World thought it could use against the West during the decolonization. Those who use human rights to undermine international law in the name of the “right to interfere” ignore that, during the entire colonial period, there were neither borders nor dictators preventing the West from establishing the rule of human rights in the submitted countries. If that was their intention, the least that colonized countries can say is that they did not prove it. Probably, that is one of the main reasons why the countries of the South so strongly condemn the so-called “right to interfere.”

Outstanding figure of the anti-imperialist movement, Jean Bricmont is a professor of theoretical physics at the University of Louvain (Belgium). He has just published Humanitarian Imperialism: Using Human Rights to Sell War (Éditions Aden, 2005).

Bombing for a More Just World?