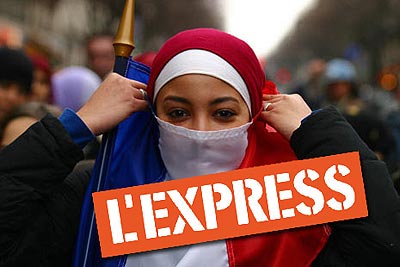 L’Express, a weekly of the French right, so willing to deal again with the themes of its colleague Le Point (the contray is also true), published a report on its January 26, 2006 edition titled: «L’Islam face à la pression islamiste» [Islam and the Islamist pressure]. In its «Enquête sur la montée de l’Islam en Europe» [Research about the Islamic boom in Europe], the newspaper proves the thesis with regard to the impossibility of reconciling the deep belief in Islam and the European democratic values. Its result is, therefore, Islamism. «The end of the euphemism dictatorship», according to the formula of the French Minister of Interior which states that we’re «at war» against «global Jihadism» seems to be declared everywhere».

With the purpose of justifying a desired toughening of Europe with regard to Islamism, the journal lapses into a sophism of worrying conclusions:

«But, above all, it was the content of those precepts what invalidated the «multicultural» solution predicated all over Europe, including the France of the 80s. Multiculturalism broke out in the essential issue of women and homosexuals’ rights which offered an effective lesson by showing that the dogma regarding the «respect for cultures», in the name of its equivalence, came into conflict with the equality of individuals. Difference is not «richness always»».

Therefore, respect for differences would not be fruitful. The attacks in Madrid and London are an example of this. Consequently, Muslim populations would be indirectly responsible for the terrorist acts. Thus:«in the end, this general Islamophilia is more counterproductive than productive: this is the current conclusion of many policy makers in Europe, very well summarized by Jack Lang when recognizing, in his spectacular change of opinion with regard to the use of veils in schools, that it had been “naive” to believe that «the mixing of differences would be so fruitful that being tolerant with peculiarities was necessary» ».

Finally, after establishing some questionable parallels between Islamism, communism and Nazism, the newspaper concludes by mistaking identity and politics and considering as a worrisome issue the fact that the offsprings of immigrants don’t renounce their origin.«These hesitations have a disintegrating effect, according to a recent research made by Sofres in France: whereas in 1993, 71% of the children whose parents were of Maghrebi origin «felt more identified with the French culture and way of living than with that of their families», they were only a 45% in 2003».