Munich Conference: accession of Israel to NATO and attack Iran 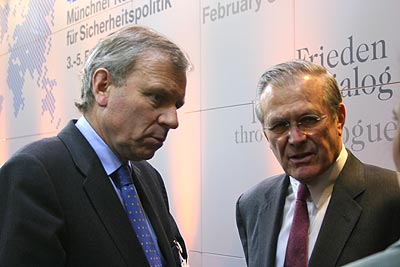 The 42nd Annual Conference about the security policy was held in Munich between February 4-5, 2006. The 300 participants discussed about expanding NATO and the Iranian crisis. Angela Merkel, Donald Rumsfeld, John McCain, Michèle Alliot-Marie and Mijail Sakachvili succeeded each other at the platform.

NATO expansion project to include the US allies had been explicitly requested in a report submitted by the former Spanish Prime Minister José-María Aznar, L’OTAN, une alliance pour la liberté in which he talked about the possibility of including not only Ukraine and Georgia, but also Japan and Australia, and why not Israel. The Alliance would become then a permanent coalition for the service of Good as defined by the White House.

However, it is not clear the link envisioned by the organizers of the Conference between NATO expansion and the Iranian crisis. The explanation was given by Aznar during a presentation prepared by George Schultz at the Hoover Institution and then in a forum published by the Wall Street Journal: NATO’s mission would be to reunite the Western and pro-Western states to defeat the Jihad (please read Islam) and especially Iran. Including Israel in the Alliance would create an obligation for all member States to provide assistance to the Jewish State if attacked by Iran, even though it was in self-defense.

Donald Rumsfeld: a Machiavellian Artist in Power
The Antithesis of Kissinger

The Bush Regime Card Deck
The 52 Most Dangerous American Dignitaries