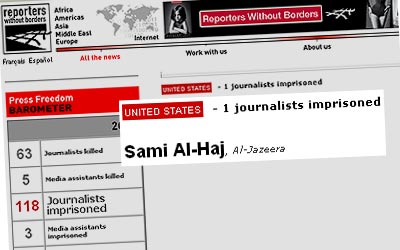 Better late than never!
On Monday, February 13, 2006, the association of Reporters without Borders (RWB) (“Quand Reporters Sans Frontières couvre la CIA”, by Thierry Meyssan, Voltaire, April 25, 2005), and (“The lies of Reporters without Borders]”, by Salim Lamrani, Voltaire, September 2, 2005.”), officially requested the release of the Sudanese journalist Sami Al Haj, cameraman of the Arab information network Al-Jazeera. Sami Al Haj, arrested by the United States since December 2001, is still in jail at the US Guantánamo base. The Qatari TV network echoed the RWB’s request in an editorial published on February 15 in its Internet website (“صحفيون بلا حدود تطالب واشنطن بالإفراج عن سامي الحاج”, Al Jazeera, February 15, 2006.).
The request of the association under Robert Menard was made on the same day that a UN report was released demanding to close the detention camp at the US Guantánamo base and after the hard criticism that triggered the long silence of RWB in view of the situation of the Sudanese journalist. In fact, in light of the solemn call for the release of Sami Al Haj, RWB paid little attention to the journalist. On September 20, 2002, the organization had demanded an explanation from the US State Department about the arrest of Sami Al Haj (“Détention à Guantanamo d’un journaliste d’Al-Jazira”, Reporters Sans Frontières, September 20, 2002.) in a communication in which RWB suggested, however, the possible guilt of the journalist by indicating enigmatically that «Al-Jazira has released several times video tapes of Osama Bin Laden, alleged leader of Al Qaeda». Later, the RWB remained totally silent about the issue until January 27, 2006, date in which it took up its September question of 2002, after three years without receiving any reply from the United States.
This remembrance, suddenly, of the existence of the journalist in jail is probably due to the campaign of our collaborator Salim Lamrani, author of a denunciation text against the RWB double standard that evidenced the satisfaction of this organization towards the United States, an article released in our website last January 22 (“Reporters without Borders keeps silence about journalist tortured in Guantanamo”, by Salim Lamrani, Voltaire, January 30, 2006.). It seems that the major impact of this article was what made Reporters Without Borders to demand, at last!, the release of the journalist.