Can Iran build the atomic bomb?

Consultations keep on the rise in order to have a resolution passed by the UN Security Council on Iran. Russia plays a crucial role in this moment as the major obstacle to the adoption of such a resolution against Teheran, which Washington and the neo-cons try to impose, and as the main interlocutor of the Islamic Republic as to the nuclear issue is concerned. In an interview granted to Ria Novosti, Viktor Mijailov, sometimes presented as the father of Iran’s electro-nuclear activity, gives his own version of the facts. For him, it is evident that Iran wants the atomic weapon and it could build it in a five-to-ten-year term. However, he also says he is convinced that Russia will reach an agreement with Teheran, as well as that the United States will retaliate anyway. 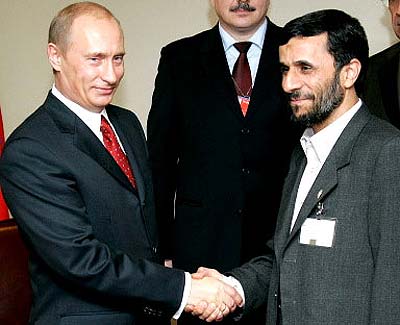 Viktor Mijailov is the director of the Strategic Stability Institute with the Ministry of Atomic Energy and former Atomic Energy Minister.

Viktor Litovkin:Mr. Mijailov, specialists consider you the father of Iran’s electro-nuclear activity. Do you know what the nuclear industry of Iran stands for at present and in what conditions it is?

Viktor Mijailov: In effect, I took part in preparations of the contract on the construction of the Buchehr nuclear plant. I was one of the founders. The United States did not want to cooperate with us and put unacceptable conditions to its cooperation; so we had to resort to the East, Iran, China and India. We had to save our national nuclear industry, we had to guarantee an employment for our high-level specialists to prevent them from falling in the temptation of going to those countries which wanted to build their own atomic bomb.
In fact, I did not returned to Iran since I quit my post as minister, but when I visited that country I was able to prove that nuclear research in that moment had reached important advancement, which was not surprising. Practically all Iranian nuclear scientists got their knowledge in US and western European universities, where teaching is excellent. According to my own information, nearly 10,000 Iranians are studying abroad, particularly in Europe and the United States.

Furthermore, Iranian labs count on very efficient calculation equipment made by large western companies (for instance Siemens), equipment like those which the United States prohibited from being sold to us. Therefore, I think that Iranian research centres still have the necessary scientific and technical level.

VL: Should we fear that Iran could soon build the atomic weapon?

Viktor Mijailov: That is a frequent question, sometimes asked in the following context:
«Do you think that they want to build it or that they only think of building it?» Then, I answer: «They are thinking about it and they want to build it. That is obvious». At present, if you don’t have the atomic weapon, it is difficult for you to maintain your sovereignty and independence. The US policy consists of imposing the US democracy by means of force. They impose it on countries with a very rich history and which made significant contributions to humankind. But Washington does not know how to treat those nations with deference and it scorns their traditions. Washington tries to remodel those countries in the US style, which is impossible to do.

VL: But, in the end, Does Iran has the necessary capabilities to create the nuclear weapon or doesn’t it?

Viktor Mijailov: Yes, of course. Any highly developed country now has the capacity to create it, even by navigating on Internet. They only need money and time. How much time? I think they could get it in five or ten years. They can create the bomb. Of course, it would not be that sophisticated as ours or as that of the United States. But that does not matter. The American are afraid of it no matter how invulnerable their anti-missile defence may be. Washington is fully aware that a nuclear bomb can be loaded by different means on a ballistic missile. So they are afraid even of a single explosion on US territory.

VL: the West does not trust Iran. However, Russia is selling nuclear technology to that country. What is the objective?

Viktor Mijailov: Russia has never sold nuclear technology. What’s more, I can tell you that, since the times of the USSR, Russia has rigorously observed the non-proliferation of nuclear technology. The West, where the market economy prevails, is the only one that can do such a thing.
For the market, gains are the most important thing. It was the West that provided Iran with all it has today. There is no Russian technology in nuclear centers in that country. Even the fuel we are supplying to the nuclear central will be repatriated later to Russia and transformed to be replaced only after the process takes place. I have not been the only, since other Russian experts have already suggested the US to create a fuel leasing system for a long time now. The country pays for the fuel, we supply it and we recover it afterwards.
George W. Bush is now talking about that as if it were a significant finding, but it is not. I made that suggestion over ten years ago. The Americans did not support that suggestion.

VL: How do you explain the failure of the Europeans who tried to convince Iran not to break the IAEA seals and not to do research with nuclear reactors? Why does Teheran ignores the proposal made by the European Troika (Britain, France and Germany)?

Viktor Mijailov: I think that the Europeans will need time to have Iran trust them. Due to the US pressure, they abandoned the construction of the Buchehr plant after 1979. Who could guarantee that they will not step back from their own proposal due to Washington’s pressures?
Teheran knows perfectly well that such a situation could happen again, so I do not think that the Iranians will give the smallest credit to talks with the European Troika. However, that situation is different in the case of Russia. _ The Iranians are observing how our relations go, they observe that we support their energy program, their electro-nuclear industry. We proposed them to set up a joint venture to enrich uranium. That would be useful for both of us. We would have a civil nuclear market and they could advance in the operation of that kind of plant. It would result irrational for them to build only one for a single reactor. Such a production unit is not profitable in a 100-year term.

We talked about that with the Iranians. If they have the intention of building a dozen plants, we will study the enrichment issue. They had asked me to build a plant similar to the one we raised in China. But China is a different country; the Chinese have gas-diffusion plants and other enterprises which they need…

VL: But, Why did Teheran finally accepted to build that kind of an enterprise with Russia?

Viktor Mijailov: I don’t think Iran is interested in investing in a joint venture. It is all about dealing with passions in regard to that country, it is about depriving the US from a pretext to use force against Iran…You perfectly know that the United States has more than 100,000 troops, tanks and war planes in Iraq, a country which a close neighbour to Iran, so those troops are ready to cross the Iran-Iraq border at any time…I think that the Iranians are making an effort to dissuade Washington from doing so. The Americans will not start armed operations during Summer since climatic conditions are not favourable for that.

VL: However, the Americans could resort to the use of bombs and missiles.

Viktor Mijailov: Consequences would be serious for them. The Iraq-based US troops are facing the limit of what they can withstand and they would have to face the Iranian army as well. It is a dangerous scenario. It is true that they could ask Israel to hit Iran too. But that would not solve the problems either. They do not know where the centres are deployed or if they are vulnerable. Not by mere chance, the Americans are creating penetrating nuclear munitions that could hit underground targets several hundred meters beneath the surface. It is all about a problem that they have not been able to solve yet.

VL: How could Russia help in finding a solution to the «Iranian nuclear problem»?

Viktor Mijailov: We could set up a joint venture with Iran to enrich uranium and it would be able to supply all countries interested in developing their own electro-nuclear industry, so that they do not carry out isotope enrichment by themselves…Here is another point of concern. Perhaps, instead of armed aggressions against Iran economic sanctions could take place.

VL: How can Russia make sure that in such a situation Iran will not build a nuclear weapon?

Viktor Mijailov: Russia has no interest in Iran possessing the nuclear weapon. We also see the need to limit Teheran’s desire to obtain such a weapon. However, it will depend on Washington to a large extent. The Americans have to realize that Iran is a huge power with a rich history and that they should not put pressure or threaten it. Perhaps a proposal for negotiations would do good…It is a long-term process, but we have to undertake it and only that way the United States will be able to solve the problem. The use of force will lead nowhere. On the contrary, the situation would worsen and it would turn more difficult than in Iraq or Afghanistan.

VL: And if Iran does not accept Russia’s proposals?

Viktor Mijailov: They will accept them, although they take time to do it. However, even then, the United States will probably apply its sanctions.