The immigration demonstrations held across the country not only marked an historic mobilization of one of the nation’s most silenced sectors. They also turned the tide on a national debate that threatened the basic values and cohesion of U.S. communities. Millions of people poured into the streets last week and their cries of protest went beyond whether or not to enact a certain piece of legislation. The fundamental demand of the marchers was for recognition within the country they call home. 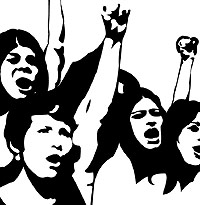 Recognition is a word with many nuances. To recognize is first to see the other person, and then to register both likeness and difference. To recognize rights is to grant that person the respect and protection afforded other members of society. To recognize a shared humanity is to regard the labor, family, values, and culture of others on a par with your own.

For the past several years a movement has grown that claims that those who enter this country illegally forfeit not only rights of citizenship but also universal human rights. They may be hunted by armed vigilantes, denied basic necessities even in dire need, barred from health services, and treated in some cases as virtual slaves—all for crossing the international border without papers. This is a treatment we do not even reserve for prisoners who have committed heinous crimes.

Restrictionists build on legitimate fears. A nation must control its borders. Terrorism is a reality. But from there they leap to non sequiturs. Migrants are not terrorists, nor are they an invasive species. Migrants are people who seek employment in another country because they cannot find decent work in their own.

As in Mexico, where unemployment has risen and real wages fallen since NAFTA, this is often due to the same economic policies that have enabled the U.S. economy to grow and offer them a significantly higher standard of living. U.S. corporations often employ a three-tiered labor source: rock-bottom wages to workers in developing countries, below-standard wages and benefits to undocumented workers from those countries who have migrated to the United States, and an ever-eroding legal wage/benefit base to U.S. workers. With the flexibility and cost-saving of this system, many are posting record profits.

The immigration debate before this month seemed to run only within the channels etched by seal-the-border restrictionists or businesses seeking to guarantee a cheap and pliable labor force. The solutions posed on both sides were punitive: felony status or guest worker programs; that is, criminal procedures or a situation of exception that welcomes migrants’ labor but cuts off all other aspects of human development. The latter is an improvement over the former, but still not a solution.

The rivers of people in the streets April 10th broke through the banks and cut a new channel. The national debate will not be able to ignore those marchers or their demands for immigrant and labor rights. New proposals will have to take into account paths to citizenship. Many migrants’ children were born and grew up American. The presence of tens of thousands of these young people in autonomous actions such as feeder marches and school walk-outs marked their willingness to stand up for their identity, their rights, and their communities.

Members of Congress are already beginning to do the math. These children vote or will soon vote. The marches mobilized many of the estimated 12 million undocumented workers in the nation, but they also awoke the sleeper indignation of church people and plain citizens who disagree that discriminatory barriers and pogrom-like purges are what are needed to save their communities. After the massive display of public sentiment, there are already signs that the immigration policy debate has shifted away from the draconian anti-immigrant measures proposed by the hard-line restrictionists. In the days following the mobilizations, for example, congressional leaders stated that the provision of HB 4437 that makes illegal immigration a felony would no longer be considered.

The marches also broke old stereotypes of immigration. It may be that the largest demonstrations took place in the traditional immigration hubs— Los Angeles, Chicago, New York . But they also took place in hundreds of cities around the country. Mexican forestry workers in Oregon, meatpackers in the Midwest, tomato-pickers in Florida, and service workers in just about every major city joined in. Their sudden visibility illustrated that immigration to the United States has not only intensified in recent years but it has also diversified until it affects every state and most sectors of the economy.

Congress is still far from coming up with a truly comprehensive immigration reform—one that will repair communities, grant workers rights, and bring order to the border. Nobody knows exactly what such a bill would look like yet. But one thing is clear: the debate on immigration has changed course. The peaceful protestors who bore huge banners reading “We are America” were not taunting, demanding, or excluding anyone. They were simply stating a fact.

Director of the Americas Program of the International Relations Center (IRC).