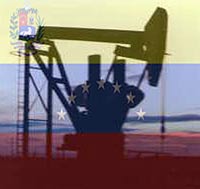 “I want to modestly offer help to the poorest people who in winter, don’t have resources for heating [their houses],” Chávez, accompanied by Bolivian President Evo Morales and Cuban Vice President Carlos Lage, told a group of European and Latin American socialist organizations. He said the program would be an expansion of the US program, but did not offer details of how such a program would work. The heating oil programs to the global north appear to be part of a long term Chávez strategy of developing links between low income and progressive people across the globe. “We have to unite all possible movements, otherwise the world is not going to change," Chávez was quoted in All Headline News as saying at the talk.

Chávez said the program would rely on the involvement of progressive European groups “You Europeans can help us greatly. Your European social networks can make sure the support arrives where it should,” he said.

At the opening of the discounted program in Delaware, the Venezuelan ambassador to the US, Bernardo Alvarez, said that the program was applying Bolivarian value to its oil sales in the United States. “What we are doing here in Delaware, reaching out to help low-income people, is consistent with what our Venezuelan government is trying to do at home with social programs that have taught 1.5 million adults to read and given access to health care to more than 10 million Venezuelans. The poor of Venezuela has the same face of the poor in the rest of the world; our goal at home and abroad is to improve the lives of people who have historically been left behind,” said Alvarez last February.

The program in the US was started in response to a request by a group of US senators to 10 major oil companies to donate a portion of their profits to help the poor in the wake of record oil prices. Citgo alone responded, and the move was criticized as political and meddling in US energy policy by some Republican politicians, but warmly received by communities who received the discounted heating oil. At least one city, Chicago, turned down Citgo’s offer of discounted fuel.

The discounted heating oil program met with controversy in Venezuela, with critics saying the money could be better spent among the poor in this country, and proponents supporting the idea of helping the poor regardless of nationality.