September 11th : 42 percent of US citizens doubtful about official version

While almost no French or US journalist is doubtful about the official version released by the Bush administration on the September 11 attacks, 42 percent of all US citizens questions the dogma of an Islamic conspiracy. Such a questioning is raising serious mistrust of the mainstream media in the United States and significant rejection of political institutions, as revealed by a survey conducted by the prestigious International Zogby Institute. 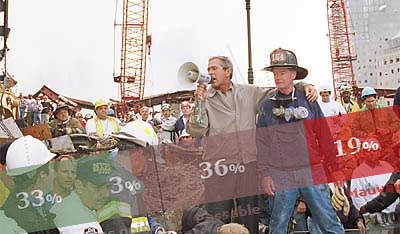 An Analysis by Thierry Meyssan

Today’s information dynamics, in which a new development replaces a previous one so fast, leads us to consider the support given by US society to any action undertaken by the Federal Government. That way, the support given to George W. Bush during US attacks against Afghanistan and Iraq yielded to increasing discontent for the human cost stemming from the occupation of Iraq. However, that is only the tip of the iceberg. Deep and huge internal political tensions briefly appeared on TV screens when US troops were seen as they shot victims of hurricane Katrina, instead of helping them. A series of opinion surveys over the past few months brought to the fore the existence, in the US, of an open division between those who benefit, themselves, from the system and those who, aside from questioning Federal policy, reject local institutions. The serious situation, incomparable to any other developed countries, makes you think that the United States is about to experience one of the major crisis in its history.

Firstly, US citizens have lost confidence in their institutions.

30 percent of US citizens have a negative opinion on the jurisprudence of the Supreme Court (Fox News/ Opinion Dynamics, January 24-25, 2006)
- 56 percent of them think that the US President is not being honest and appoints executives on friendship basis. 61 percent think that the Federal Government does not care for them (USA Today/Gallup, April 28-30, 2006).
- 41 percent say that their representative or senator is corrupt (Pew Research Centre/Princeton Survey Research Associates, Feb 1-5, 2006). 83 percent assert that Congress is generally more or less corrupt (USA Today/Gallup, April 28-30, 2006). Finally, 76 percent consider that Congress is not worthy of trust (Lichtman/Zogby, April 18-24, 2006)

Secondly, institutions were deeply modified after the September 11, 2001 attacks. The USA Patriot Act overrode major provisions in the Bill of Rights; that is the part of the Constitution that guaranteed the rights of defendants. The mission of US armed forces was reconsidered based on a new interpretation of the Pose Comitatus Act, meaning that the Department of Defense is now in charge of interior order. Such transformations are based on the interpretation of the September 11 attacks as a foreign aggression against the «US people and their way of life». As a consequence, the political legitimacy of those transformations fully depends on the support that citizens may give to the official version of the attacks.

42% of US citizens doubtful about official version
They think US government and 9/11 commission are covering up something.

However, the survey by Zogby—whose results we offer here—reveals that:

44 percent of US citizens think that George W. Bush used the attacks to launch the war on Iraq.
- 42 percent assert that the Kean Commission, appointed by President Bush, did no respond to the arguments presented against the official version by the movement I launched. For them, the official report has the only objective of hiding the truth.
- 45 percent demand a new investigation into the September 11 events.

The discredit of US institutions also affects the media. 58 percent of US citizens no longer trust the media (Lichtman/Zogby, April 18-24, 2006). It is funny that only 19 percent complain about the treatment given by the media to the September 11 events. That is not the case of those who question the official version and get upset about the unanimous media performance, but contrary to followers of the system, those who get annoyed with the fact that doubts are getting hold of people’s minds. Their views are considered in two ways. On the one hand, there are those who criticize the media for having ridiculed and distorted our arguments instead of having proved them wrong, and on the other hand, those who complain about the media being controlled in such a way that they could not reflect opposing views.

These opinion surveys took place just before the US State Department released a full video on the attack against the Pentagon. The Video proves that the plane that hits the building does not have the size nor can it develop the speed of a Boeing 757-200. [1].

According to the opinions collected, the video rather confirms the position of those who question the official version. It is even possible that the video may help those hesitant to change their minds. It is less probable, however, that the video leads the supporters of the Islamic-conspiracy theory to reconsider their own opinion, which is more linked to their socio-economic status than to the result of logical reflection.

This is a telephone survey of adults nationwide conducted by Zogby International. The target sample is 1,200 interviews with approximately 81 questions asked. Samples are randomly drawn from telephone cd’s of national listed sample. Zogby International surveys employ sampling strategies in which selection probabilities are proportional to population size within area codes and exchanges. As many as six calls are made to reach a sampled phone number. Cooperation rates are calculated using one of AAPOR’s approved methodologies and are comparable to other professional public-opinion surveys conducted using similar sampling strategies [2]. Weighting by region, party, age, race, religion, and gender is used to adjust for non-response. The margin of error is +/- 2.9 percentage points. Margins of error are higher in sub-groups.

Zogby International’s sampling and weighting procedures also have been validated through its political polling: more than 95% of the firm’s polls have come within 1% of actual election-day outcomes.

23. Some people have said that the Bush Administration exploited the September 11th attacks to justify the invasion of Iraq. Others say that Bush acted correctly by going into Iraq because Saddam Hussein supported terrorism. Who are you more likely to agree with? [3].

People are completely divided on whether they believe President Bush exploited the 9/11 attacks (44%) or justified an attack on Iraq (44%). Approximately one in ten (11%) is not sure.

The largest majorities who feel that Bush exploited Sept. 11th attacks are Democrats (69%), Hispanics (59%), and Jews (64%). Close to half or more of 18-29 year-olds, single adults, African Americans, and residents of the Central/Great Lakes, West, and large cities agree.

The largest majorities who feel that Bush justified an attack on Iraq are Republicans (72%) and residents of rural areas (59%). Approximately half of whites, 30-64 year-olds, Protestants, suburbanites, and married adults agree.
Men and women are both evenly divided.

24. Some people believe that the US government and its 9/11 Commission concealed or refused to investigate critical evidence that contradicts their official explanation of the September 11th attacks, saying there has been a cover-up. Others say that the 9/11 Commission was a bi-partisan group of honest and well-respected people and that there is no reason they would want to cover-up anything. Who are you more likely to agree with?

Both men and women and residents in each of the four regions are more likely to say the U.S. government and 9/11 Commission are not covering up anything. Majorities who agree include Republicans (64%), 50-64 year-olds, married adults, suburbanites (59%), Protestants, those with at least some college education, and people with annual household income of $50,000 or more (57%).

Majorities (50%-56%) of Democrats, 18-29 year-olds, Hispanics, single adults and those who are divorced/widowed/separated, residents of small cities, and adults with less education than a high school diploma believe the government and 9/11 Commission are covering up something. Nearly half of independent voters (48%) agree.

25. World Trade Center Building 7 is the 47-story skyscraper that was not hit by any planes during the September 11th attacks, but still totally collapsed later the same day. This collapse was not investigated by the 9/11 Commission. Are you aware of this skyscraper’s collapse, and if so do you believe that the Commission should have also investigated it? Or do you believe that the Commission was right to only investigate the collapse of the buildings which were directly hit by airplanes?

Pluralities in many sub-groups are not aware of World Trade Center Building 7’s collapse. This includes Republicans and independents, adults 30 and older, whites, residents of the East and Central/Great Lakes regions, and women.

Majorities of Hispanics (56%) and 18-29 year-olds (52%) and pluralities of Democrats and Southerners are those most likely to be aware of World Trade Center Building 7’s collapse and think the Commission should have investigated it.

Republicans (21%), college graduates (20%), people with household income of $75,000 or more (22%), and men (17%) are among the most likely to be aware of the building’s collapse and think the Commission was right to investigate just the Twin Towers’ collapse.


Video: In a broadcasted interview, the owner of World Trade Center, Larry Silverstein, confirmed having authorized the control demolition of the tower n°7 on September 11th, 2001 afternoon. This destruction presuposes that the explosives were prepared and placed a long time in advance.

26. Some people say that so many unanswered questions about 9/11 remain that Congress or an International Tribunal should re-investigate the attacks, including whether any US government officials consciously allowed or helped facilitate their success. Other people say the 9/11 attacks were thoroughly investigated and that any speculation about US government involvement is nonsense. Who are you more likely to agree with?

People are again closely divided, this time with a slight plurality (47%) saying the attacks were thoroughly investigated, while 45% feel the attacks should be reinvestigated. Nearly one in ten (8%) is not sure.

Majorities in several sub-groups feel the attacks should be reinvestigated. The most likely are Hispanics (67%) and African Americans (64%). Other majorities include up to 57% of Democrats and independents, 18-49 year-olds, residents of the Central/Great Lakes, high school graduates and those with less education. Between 56%-61% of people with household income less than $25,000 agree.

27. How would you rate the US media’s performance regarding 9/11, including their coverage of victim families’ unanswered questions, theories that challenged the official account, and how the attacks were investigated?

Majorities in a few sub-groups give the media positive ratings. These include 50%-58% of African Americans, residents of small cities, divorced/widowed/separated adults, Progressives, those with less than a high school diploma, and people with household income less than $15,000 and $25,000-$34,999.

In all remaining sub-groups, majorities rate the media’s performance as negative. This includes approximately three-fifths of Republicans, conservatives, Hispanics, residents of the West, married adults, college graduates and those with some college education, and people with household income of $35,000-$74,999. People whose political ideology is Libertarian (74%) and very conservative (67%) are the most likely to give negative ratings.

Request of assistance in response to pandemic on USS Theodore Roosevelt