In a series of agreements signed between Venezuela’s President Hugo Chavez and Ecuador’s President Alfredo Palacio, Venezuela agreed to help Ecuador construct a new refinery and to expand an existing one, among other energy-related issues. 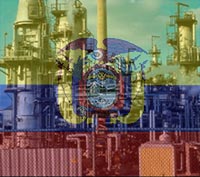 The deal is expected to provide additional earnings to Ecuador of over $360 million per year for the refining of 100,000 barrels of Ecuadoran crude per day. Chavez was in Ecuador’s capital Quito to sign the agreements, following his visit to Bolivia.

Another part of the agreement would provide Ecuador with Venezuelan liquefied gas. Chavez, during a press conference in Quito, suggested that Venezuela would sell the gas directly to the Ecuadoran government, which would then market it, allowing consumers to save up to 20% of the cost by cutting out middlemen.

Chavez promised that these agreements would mark a new beginning in relations between the two countries. “These seven months that remain in the government of my friend President Palacio, we will use to construct a solid new floor, of political, social, technical, scientific, and energy relations,” said Chavez.

Ecuador’s President Palacio responded, “Thanks to the Venezuelan people and thanks to President Chavez, the hydrocarbon policy and petrol history of Ecuador will change.”

During his press conference, Chavez predicted that Ecuador would be attacked, just as Bolivia has been attacked for the nationalization of its natural resources. While Bolivia recently announced the nationalization of its natural gas fields, Ecuador recently annulled a contract with Occidental Petroleum. “Allow me to congratulate you, President, for the decisions you have been taking to recover the strategic management of the natural resources of Ecuador,” said Chavez. The U.S. recently suspended negotiation of a Free Trade Agreement with Ecuador in response to Ecuador’s decision to suspend the Occidental Petroleum contract.

Ecuador: Correa not attending Summit of the Americas

The Ecuadorian Coup: Its Larger Meaning