From the offices of the Ministry of Energy and Petroleum in Caracas, Venezuelan President Hugo Chavez launched the 141st (Extraordinary) OPEC Meeting, on Thursday, where he welcomed the various international delegations and declared that OPEC “has always represented a flag of freedom for the third world.” 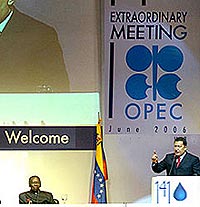 Chavez has played an important roll in OPEC since becoming president in 1999. The last OPEC summit to be held in Venezuela, in September 2000, was largely as a result of Chavez’ efforts to revitalize the organization. OPEC President and head of the Nigerian delegation, Dr. Edmund M. Daukoru, thanked Chavez for his hospitality, on Thursday, and stated that he has been “one of the principle guides that has led OPEC since.”

On Wednesday night, while hosting a Gala dinner for the Heads of the various foreign delegations, Chavez announced, “This summit is destined to be one more success along this road of strengthening our organization for the good of our people and for the good of all the people of the world, in order to guarantee the road of development towards a new world. I ask god for all the success in these deliberations and that the OPEC continues to work towards a better world.”

He stressed that, now, six years after the last OPEC meeting in Caracas, the group “with dignity and profound work consciousness, occupies a very important space in the economy, energy, and geopolitical situation of the world.” Chavez reiterated the historical importance of the OPEC meeting, during his abnormally short, 1-hour long opening speech, on Thursday.

“In my opinion, one of the most revolutionary acts in the history of the third world was the formation of the OPEC.” he said. “We gave away petroleum for a century to satisfy the necessities of the developed countries. That is called colonialism; that is called imperialism…. That is why OPEC is an anti-imperialist organization.”

Among numerous other comments and proposals, Chavez called to fix minimum oil prices at $50 a barrel, with an “infinite” ceiling. He added that no one at OPEC is looking for an increase in the price of petroleum, and that OPEC “will continue to act as a price regulator.” Chavez, as well as OPEC President Daukoru, blamed the high price of petroleum not on the lack of supply, but on speculation and geopolitical tensions, such as “the aggression against the Iraqi people, and the threats against the people of Iran.”

“OPEC doesn’t want war,” Chavez said during his speech, “We want to be able to insure an adequate and just supply for the necessary development of the world, preserve our natural resource and have the necessary resources for the development of our countries [and] of our people.”

Oil Analyst and editor of the website, petroleumworld, Elio Ohep, said that most, but not all, of the OPEC delegates would probably agree with Chavez’ positions. Nevertheless, he points out that the Venezuelan President has a very clear agenda.

“Chavez was very clear today,” said Ohep, “he wants the OPEC to be the leader of his world socialism". He said it very clear[ly]. OPEC means Organization of Petroleum Exporting Countries, but it also means Peace and Progress. Producing Oil for Peace and Progress. Ohep added that at this weeks’ OPEC, Chavez is without a doubt, demonstrating his influence in the organization. “Chavez is asserting his leadership, and he is telling people, ’Yes, I’m for gaining a proper place in the world, [I’m for] confronting imperialism’… That’s why he is promoting the meeting… He’s giving another push for OPEC and showing the world that he’s leading.”