This Sunday, from the Venezuelan state of Bolivar, President Hugo Chavez announced the recuperation of the “largest latifundio” (plantation) in the country, and the creation of the Socialist Production Unit "Manuel Piar." 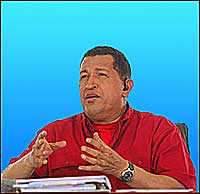 The announcements were made on Chavez’ 259th transmission of his weekly television program, “Alo Presidente,” broadcasted from the recently recuperated “La Vergareña” latifundio, which, at 187,238 hectares (468,095 acres), was considered to be the largest in the country. According to the Venezuelan Ministry of Communication, La Vergareña, is twice the size of the Margarita Island and within its borders are a forest reserve that “has been indiscriminately disrespected for a long time,” six campesino land occupations, and various indigenous communities.

According to the press release, the Socialist Production Unit “Manuel Carlos Piar”, was created after the recuperation of the estate, with the objective of “diversifying the region’s production… and proposing to improve the living conditions of the families located in the area, through the organization and participation of the community,” said Chavez.

Chavez announced that they would be moving forward to launch the “ambitious project” to build the former estate in to “a pole of economic, social and human development.” “This is land that is precisely being recuperated for the indigenous, agricultural production, and everything that is necessary to live a better life,” he said.

Among the projects for the region, Chavez announced the creation of the “Great City of Wood” and called for the development of infrastructure in order to interconnect the area with the rest of the country.

During the program, Chavez called for an end to all latifundios throughout the country, and announced that no latifundio is “untouchable.” “The Revolution will continue and will continue to recuperate territory. The day will arrive, sooner than later, that there won’t be one latifundio in Venezuela. Zero latifundio!”

“The violence from assasins continues to hurt the campesinos,” he said. “The impunity is terrible and this is a reflection that should push us to efficient action.” “If someone who I have put in charge doesn’t feel up this struggle… resign, but we can not let them massacre campesino leaders without anyone being held responsible.” Chavez said, calling on the Ministry of Justice and the Venezuelan Intelligence Agency (DISIP) for increased action and investigation.