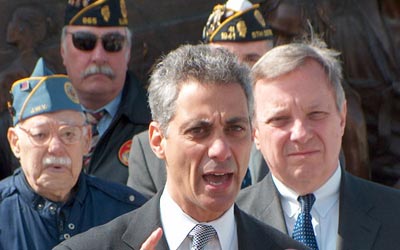 The new democratic group (Democratic Caucus) in the U.S Congress House of Representatives has elected Rahm Emanuel as a new chairman. Former professional dancer, Mr Emanuel was Bill Clinton’s presidential campaign treasurer, then his political director in the White House.
He was one of the main protagonists of the Free Trade Area of the Americas Agreement and would have played a role in Wye River negotiations on the Middle East. He inspired Josh complex character in the famous television series The West Wing. Today, he is Chicago (Illinois) elected representative.

Of Israeli origin, he obtained the United-Stator nationality at the age of 18. As a volunteer engaged during Desert Storm operation ( 1991 ), Rahm Emanuel (then 32-years old) has served for Israel defence against a possible Iraqi attack.
Accused afterwards of being a Tsahal officer and of being subjected to a double allegiance, Mr Emanuel pointed out that he had not served in the uniform. In fact, according to our information, he would be a member of Amal, Tsahal’s military intelligence service.

Rahm Emanuel is Benyamin Auerbach’s son. On September 17, 1948, Mr. Auerbach took part, under Yitzhak Shamir’s authority, in the attack that caused the death of both the Swedish count Folke Bernadotte (UNO mediator in Palestine) and the French colonel André Sérot (a United Nations military observer).
It is this double assassination which put an end to the binational State project in Palestine and which transformed the Israel State nature itself in comparison with what had been decided by the UN Organisation.

Rahm Emanuel’s younger brother, Ari Emanuel, is Michael Moore’s agent in Hollywood. He encouraged this latter to point out the supposed responsibility of Saudi Arabia in September 11 attacks in his famous film Fahrenheit 911, the showing of which was ensured by the Democratic Party.