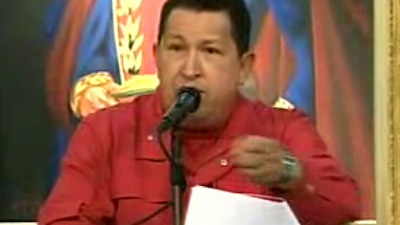 The President of the Bolivarian Republic of Venezuela, Hugo Chavez, has denounced in length the CIA-organized "velvet coups" attempts around the world, including against his own government, using techniques revealed by Thierry Meyssan.

The head of the Venezuelan State was making a speech in the presence of Daniel Ortega, the recently elected president of the Nicaraguan Republic, and the Cuban Minister for Economic Cooperation, Marta Lomas, for the signing of the Bolivarian Alternative for the Americas (ALBA), a new economical and political pact for Latin America, on June 3rd 2007. The ceremony was taking place in the main hall of the Miraflores presidential palace, under the portrait of Simon Bolivar, liberator of the Americas, and was broadcast live on national radios and television channels of the signatory States.

Alerting the peoples he was addressing, President Hugo Chavez quoted the works of Thierry Meyssan, author of The Big Lie, The Pentagate and president of the Voltaire Network. He read out loud, for more than ten minutes, an article written by the French intellectual detailing the techniques developed by the Albert Einstein Institution, which is run jointly by the CIA and NATO. He then expressed his willingness to give Thierry Meyssan a tribune that would allow him to better share his analyses.

Investigations by Thierry Meyssan had already been used as a basis for the enquiry of attorney Danilo Anderson on the organization of the aborted military coup to overthrow President Chavez in April, 2002. This lawyer was assassinated by the CIA in November, 2004. In September, 2006 President Hugo Chavez had claimed his support to Thierry Meyssan’s analyses on the organization of the September 11th, 2001 attacks by a group within the US military-industrial complex, leading the Venezuelan parliament to ask President George W. Bush for explanations concerning the discrepancies in his narrative of the attacks.

Considered as one of the main anti-imperialist thinkers currently in activity, Mr Meyssan leads the Axis for Peace conference and advises a dozen governments of non-aligned countries. He has just published new book about the remodeling of the "Great Middle East", The Big Lie II.

Thierry Meyssan’s new book, The Big Lie II, has just been released in Lebanon and France (Arabic and French languages) and is available in Voltaire Network’s online bookstore. An announcement will be made as soon as the English translation is available.

The article read by Hugo Chavez: "The Albert Einstein Institution: non-violence according to the CIA".