The Assassination of Benazir Bhutto, according to an Indian General


Why is the situation in Pakistan irremediable?

The murder of the popular Pakistani politician Benzir Bhutto is linked to a precise agenda. For decades the United States has financed the Pakistani military regime. Washington has supported the most extremist radical elements and has provided sophisticated weapons to a government composed of a military and religious fundamentalist alliance to ensure backing for US interests. For instance, the fact that US-controllled Pakistani Secret Services (ISI) were involved in 9/11 is no longer a secret

The assassination of Benazir Bhutto and the resulting turmoil in Pakistan has again brought into focus the strange symbiosis between the George W. Bush administration and the General who has plunged Pakistan into the sorry state in which it finds itself. Before commenting on this on-the-face-of-it unshakable bond attention is first invited to excerpts from a talk entitled "Geopolitical Clairvoyance" delivered to an international audience nearly 30 months ago. Quote:

"Turning to Pakistan it will be seen that Gen. Musharraf’s credentials for running Pakistan may appear increasingly attractive to the Western World and China, more recently, perhaps to India as well. The General was forced to do a U – turn after 9/11 with a gun to his head. He capitulated.

Publicly he has been making all the right noises. These have been music to US ears. Even his liberal leanings may flow from genuine conviction. What is the reality on the ground, however?
The Jihadi elements, no matter how vociferously denounced by him in public proclamations from time to time, are flourishing as heretofore.

The madrasas – still spawning venom-spewing zealots – continue to mushroom. What is more, the political reach of the radical elements has been extended beyond their wildest expectations under his dispensation at the cost of the mainstream political parties. They are almost unshakably entrenched politically as well in the NWFP and Baluchistan.

Evidently there is a contradiction working here. How does one explain the yawning gap between the perceptions of the western elites and the equally incontrovertible signs of the strengthening of the radical elements in Pakistan, who, have, during the same dispensation, established a strong presence in Bangladesh as well.
The undeniable hiatus between the two perspectives can be put down to Musharraf’s subtle revenge on the Americans for having forced him to betray the very people who had provided a boost to his military career from the time of President Zia-ul-Haq’s Islamisation of Pakistan.

It seems to be forgotten that it was Pervez Musharraf whom General Zia had selected to deal with the restive Northern Areas. Brig. Musharraf was acting in the mould of Gen. Tikka Khan. The latter had earned the sobriquet ‘butcher of Balochistan’.
Musharraf’s handling of the unrest in Gilgit and Baltistan was no less severe. The question then arises “has Musharraf turned over a new leaf or is he playing along with the Americans to the extent that he can manage the differences"?

To highlight the point being made, a rhetorical counter question can be posed to his American and Western interlocutors.
To whit, “hypothetically, if someone had obliged Senator McCarthy with a gun to his head to go soft on communism would it be fair to assume that had he gone along to save his skin he would have actually gone soft on communism”?

Nearer our time we can pose another question, this time to those who orchestrated the invasion of Iraq, “were the neocons to be made to do a U – turn in their policies, under duress, would it signify a final rejection of their cherished beliefs”?

Should the answer to these posers be in the negative, Musharraf’s policies will become clearer – retrospectively and prospectively.
Unquote.

The US media has its own take on what might have transpired in Pakistan in the last week of December 2007 as would be evident from excerpts that follow. Quote:

"The Bush administration decided months ago to broker a power-sharing arrangement, with the deeply unpopular Musharraf retiring from the army but remaining as president and the popular Bhutto taking a third try as prime minister (after twice being ousted by the military).

That decision was based on Pakistan’s strategic importance as a sanctuary for al-Qaeda and Taliban fighters. Bush was in a quandary. Bhutto was much tougher than Musharraf on Islamist extremists, but Bush had invested heavily in the general. 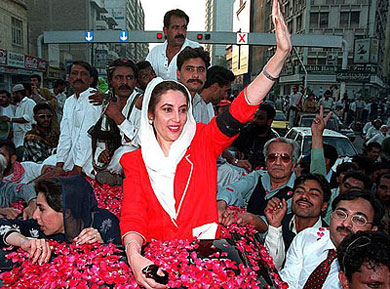 In early December, a former Pakistani government official supporting Bhutto visited a senior U.S. government official to renew Bhutto’s security requests. He got a brushoff, a mind-set reflected Dec. 6 at a Senate Foreign Relations Committee hearing. Richard Boucher, assistant secretary of state for South and Central Asian affairs, was asked to respond to fears by non-partisan American observers of a rigged election.

A more sinister fallout of a free hand from Washington for Pakistan might be Bhutto’s murder. Neither her shooting on Thursday nor the attempt on her life Oct. 18 bore the trademarks of al-Qaeda. After the carnage, government trucks used streams of water to clean up the blood and, in the process, destroyed forensic evidence. If not too late, would an offer and acceptance of investigation by the FBI be in order?
Unquote.

In [newspaper] USA Today the George W. Bush administration is perhaps the only entity left in America and perhaps the world that continues to believe in Pervez Musharraf’s chastity and his ability - or the desire - to hold free and fair elections. It raises a fundamental question of immediate concern to the American people and the world at large: "Is the Bush administration so naive that it cannot see through the Musharraf subterfuge - something that is now eminently clear to practically everyone even in Pakistan - or is there a deeper significance that America’s allies are missing"?

It is this deeper significance that US allies must focus on lest the nuclear weapons actually form the bulwark of the defences of a radical regime in Pakistan that is closer to taking over the Pakistan state than at any other time in that country’s history. The deeper significance alluded to as early as 2002 in the book "Restructuring Pakistan" and in subsequent lectures by its author is the direct complicity of the Pakistan military-ISI combine in the 9/11 attacks in USA.

Certain elements in the US were complicit as well by their knowledge of what was being planned, albeit not the full scale or nature of the operation. Senior people in the new US administration deliberately turned a blind eye to what was happening, both prior to the event and post facto. Having supped with the devil the US administration is not in a position to unilaterally abandon General Musharraf. The same dilemma holds good for the Pakistan Army and the ISI. It is the latter who have the Americans by the throat rather than the other way round.

The assets that the Americans have created in Pakistan for decades are far better informed about what is actually going on in Pakistan than the US media and other governments around the world who have been trying to remove the scales from the eyes of the Bush White House. The simple truth is that there never were any scales. The US administration on account of its past complicity has delivered itself, bound hand and and foot, to the Musharraf backers in Pakistan (the military-radical combine).

Despite daily inputs that Musharraf is two-timing them they have to keep bribing the Pakistan Army elements in the know by pushing large sums into their coffers year in and year out and supplying them with sophisticated weapons that can hardly be used against the radical elements gradually strengthening their hold on the Pakistani state.

The day is not far off when these weapons will be turned against the American and NATO forces in Afghanistan and elsewhere. Needles to add that the Brits have been in the know all along.

Source : “Why is the situation in Pakistan irremediable?”, by General Vinod Saighal, Voltaire Network, 21 January 2008, www.voltairenet.org/article154495.html

Source : “Why is the situation in Pakistan irremediable?”, by General Vinod Saighal, Voltaire Network, 21 January 2008, www.voltairenet.org/article154495.html