Repression against the Voltaire Network keeps on. Jürgen Cain Külbel has been jailed in Berlin. The weak legal pretexts used to condemn him cannot hide the political motive behind this decision: our collaborator had shown that the Commissioner of the UN International Independent Investigation Commission into the assassination of former Lebanese Prime Minister Rafik Hariri had financial binds with the perpetrators, and that his main aide is a CIA agent involved in the ongoing wave of kidnappings in Europe. 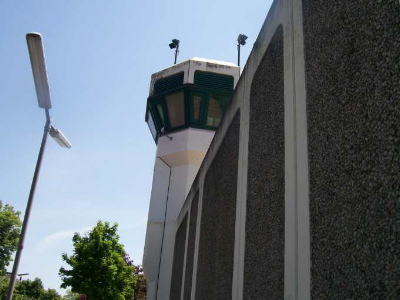 The Berlin-located prison where Jurgen Cain Külbel has been locked up, guilty of having revealed the involvement of the CIA in the assassination of Rafik Hariri, the organization of the false Syrian lead, and the manipulation of the UN Investigation Commission.

Voltaire Network collaborator Jürgen Cain Külbel has been jailed in Berlin. He is charged for having breached an emergency proceedings court order when leaving an active link on his website, pointing to a voltairenet.org article [1]

This peculiar intrigue is yet another CIA plot aimed at intimidating Jürgen Cain Külbel and the Voltaire Network collaborators. The mechanisms of this operation are as follows:

A former Eastern Germany police investigator, Jürgen Cain Külbel has led, as a journalist, an independent inquiry into the assassination of former Lebanese Prime Minister Rafik Hariri. He put out his conclusions in a book that was published in German and Arabic: The Hariri File [2]. There he tackles and elaborates elements already presented by the Voltaire Network [3]. Thierry Meyssan had shown that an association of exiled Lebanese members of the opposition, the U.S. Committee for a Free Lebanon (USCFL), had foreknowledge of the crime and had immediately launched a communication campaign aimed at directing suspicions towards Syria. [4]. The USCFL, asked by the CIA to set up a puppet regime for Lebanon in the event of a U.S. military intervention in that country, is therefore an accomplice – at least passively – in the crime. Talaat Ramih had shown that former German Public Prosecutor Detlev Mehlis, once appointed as U.N. Commissioner of the investigation, had been employed by the Washington Institute for Near East Policy (WINEP) [5]. By noting that the USCFL is a WINEP offspring, Jürgen Cain Külbel has shown that the UN commissioner was a former employee of people involved in the very murder he was asked to investigate. Following his lead, he shed the light on the role of Detlev Mehlis’ main aide, police chief Gerhard Lehmann, in the wave of CIA kidnappings in Europe that have taken place since 2001. Mr. Lehmann was indeed formally identified by one of his victims, Khaled al-Masri [6]. Several elements indicate that Mr. Lehmann may also be involved in the “disappearing” in Paris of the Hariri investigation’s key witness, Zuhair As-Siddik, on March 13, 2008 [7].

As soon as his book was published in German language, Jürgen Cain Külbel was approached by a Germany-based Palestinian militant, Said Dudin, who suggested he could undertake the publication in Arabic and promote it. However, when Mr. Külbel came to Damas to speak in a conference at the Syrian National Library, invited by Syria Alghad (Political research institute, member of the Voltaire Network), Mr. Dudin did his best to discredit the author. The publisher called for the audience to attack Western embassies and issued multiple incendiary statements to distract media attention. 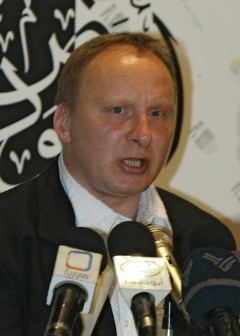 Jürgen Cain Külbel’s conference, on May 8, 2006, at the Syrian National Library (Damas).

Back in Germany, Jürgen Cain Külbel tried to know more about this botcher. He then found out that this so-called Palestinian cause advocator was the son of Mustafa Dudin, an Israeli secret agent receiving orders directly from general Ariel Sharon. Resuming his research, Jürgen Cain Külbel then unearthed, from the Stasi (Former East German political police) archives, documents certifying that Said Dudin himself was himself a long-time CIA agent infiltrated within the German radical left-wing movement. These documents were published on Voltairenet.org [8].

Filing an emergency court proceeding, Said Dudin obtained from the Berlin Court an order issued to Mr. Külbel that he would no longer mention, in any way whatsoever, the Damas incident, his father’s role within the Israeli services and his own within the CIA. Obeying the Raison d’Etat, the Court only retained testimony provided by Mr. Dudin and brushed aside that provided by Mr. Külbel, including that of prince Issa al-Ayubi, vice-president of the Voltaire Network and grand-nephew of the Arab Syrian Republic’s founder, who witnessed the Damas incident where he opposed Mr. Dudin. Besides, the Court neglected the Stasi documents according to a German amnesty law prohibiting any mention to them.

However, since Jürgen Cain Külbel had subsequently left on his personal website an active link to the Voltaire Network’s article containing the Stasi documents that were illegally made public, the Court sentenced him to 10 days imprisonment for the breaching of its order.

[5] “The disgrace of the Mehlis Commission”, by Talaat Ramih, Voltaire Network, December 9, 2005.

[6] Allegations of secret detention and illegal prisoner renditions in Council of Europe member states, a report by Dick Marty to the European Council, June 12, 2006.

DSK soon to be set free

Obama, financial war and the elimination of DSK

Regime Change at the IMF: The Frame-Up of Dominique Strauss-Kahn?

Dominique Strauss-Kahn and Salam Fayyad at the Herzliya Conference

Greece: Christine Lagarde is back working for U.S. defense industry

With Christine Lagarde, US Corporations Enter the French Government
Globalization