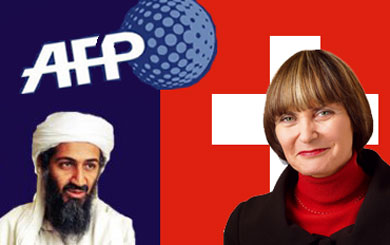 A deplorable action. AFP News Agency (Agence France Presse), one of major world information entities and whose bulletins serve of «raw material» to thousands of daily newspapers around the world, has used honest, sincere and intelligent statements by the head of Helvetic Diplomacy, Micheline Calmy-Rey, who gave a political speech betting on dialog among nations as a means to solve world conflicts, and to avoid wars among the countries and other calamities.

AFP has outrageously distorted Calmy-Rey´s statements and misinformed the public.

The misinformation was mirrored and amplified by the Atlantist Parisian daily Le Monde, which used the following headline for its article:

Micheline Calmy-Rey made her statement last August 25 in Berne, the country’s federal city capital, in the context of the inauguration of the conference of [Swiss] ambassadors. Her speech was titled «Switzerland’s Foreign Policy: Between Dialog and Exclusion.»

Calmy-Rey’s speech was an effort to warn on the large number of conflicts underway in the world and to recall that dialog is an efficient way to deactivate such conflicts; a dialog that can be achieved with interlocutors that are not or do not constitute a state. Micheline Calmy-Rey took the occasion to criticize a species of pseudo-moralistic or pseudo-thinking people who oppose all kinds of dialog with anti-establishment groups [either national or foreign, rebel or guerrilla, secessionist or separatist, etc]. Those pseudo-thinkers or pseudo-moralists see violence or repression as the only ways to solve disputes.

Calmy-Rey also points out that «some become indignant when they find in this realistic practice a way to favor [or support] some kind of proto-terrorism. Do not let us be misguided: dialog does not inexorably leads to accepting what is unacceptable; understanding does not translate into admitting and it does not mean complicity [either]. Dialog is undoubtedly based on commitment; though finding commitment in no way stands for compromising the values we deeply believe in.

Then, do we have to listen to those pseudo-thinkers? Or look for dialog without discrimination-[and she ironically adds] facing the danger of finding ourselves sitting at the [bargaining] table with Osama Bin Laden? [2]

The Swill governemnt spokes person has protested and denounce the bad faith of the AFP reporter [see official protest in English and in French].

The Swiss foreign minister has large experience in conflict mediation; she supports and promotes dialog channels in several parts of the world, for instance between Palestinians and Israelis, between the Colombian government and the FARC guerrillas.

See attachment: the interesting and full speech by the Swiss foreign minister in French.