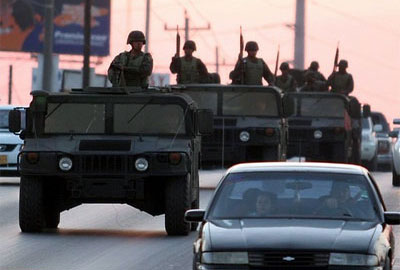 The US Army War College is on the case, ready to handle "unforeseen economic collapse" and the "rapid dissolution of public order in all or significant parts of the US." According to the Washington Post of 1 December 2008, the U.S. military expects to have 20,000 uniformed troops inside the United States by 2011 trained to help state and local officials respond to a nuclear terrorist attack or other domestic catastrophe, according to Pentagon officials.

A new report from the U.S. Army War College discusses the use of American troops to quell civil unrest brought about by a worsening economic crisis.

The report from the War College’s Strategic Studies Institute warns that the U.S. military must prepare for a “violent, strategic dislocation inside the United States” that could be provoked by “unforeseen economic collapse” or “loss of functioning political and legal order.”

Entitled “Known Unknowns: Unconventional ‘Strategic Shocks’ in Defense Strategy Development,” the report was produced by Nathan Freier, a recently retired Army lieutenant colonel who is a professor at the college — the Army’s main training institute for prospective senior officers.

He writes: “To the extent events like this involve organized violence against local, state, and national authorities and exceed the capacity of the former two to restore public order and protect vulnerable populations, DoD [Department of Defense] would be required to fill the gap.”

Freier continues: “Widespread civil violence inside the United States would force the defense establishment to reorient priorities in extremis to defend basic domestic order … An American government and defense establishment lulled into complacency by a long-secure domestic order would be forced to rapidly divest some or most external security commitments in order to address rapidly expanding human insecurity at home.”

Sen. James Inhofe of Oklahoma and Rep. Brad Sherman of California disclosed that Treasury Secretary Henry Paulson discussed a worst-case scenario as he pushed the Wall Street bailout in September, and said that scenario might even require a declaration of martial law.

The Army College report states: “DoD might be forced by circumstances to put its broad resources at the disposal of civil authorities to contain and reverse violent threats to domestic tranquility. Under the most extreme circumstances, this might include use of military force against hostile groups inside the United States.

“Further, DoD would be, by necessity, an essential enabling hub for the continuity of political authority in a multi-state or nationwide civil conflict or disturbance.”

He concludes this section of the report by observing: “DoD is already challenged by stabilization abroad. Imagine the challenges associated with doing so on a massive scale at home."

As Newsmax reported earlier, the Defense Department has made plans to deploy 20,000 troops nationwide by 2011 to help state and local officials respond to emergencies.

The 130-year-old Posse Comitatus Act restricts the military’s role in domestic law enforcement. But a 1994 Defense Department Directive allows military commanders to take emergency actions in domestic situations to save lives, prevent suffering or mitigate great property damage, according to the Business Journal.

And Gen. Tommy Franks, who led the U.S. military operations to liberate Iraq, said in a 2003 interview that if the U.S. is attacked with a weapon of mass destruction, the Constitution will likely be discarded in favor of a military form of government