Iraqi protesters call for US exit 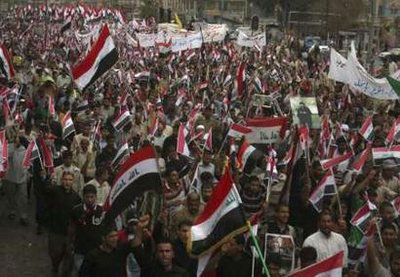 Thousands of protesters took to the streets of Baghdad calling for U.S. troops withdrawal from Iraq on the sixth anniversary of the fall of Baghdad after a U.S.-led invasion of the country.

Supporters of Muqtada al-Sadr rallied on Thursday in Firdous Square, where the statue of then-Iraqi president Saddam Hussein was pulled down on April 9, 2003.

The demonstrators waved banners and carried pictures of al-Sadr, calling for an end to the US occupation of Iraq.

The rally, which went ahead despite heavy rain, comes amid US preparations to pull its combat troops out of Iraq by the end of June.

Iraqi police kept watch over the protest but did not enter the main square. Iraqi and American armoured cars were on standby a short distance away.

Abdel Wahab Al-Qassab from the Strategic Studies Centre in Doha, Qatar, which researches political and military strategies, said that Iraqi public opinion is overwhelmingly in favour of US forces leaving the country.

"The US has said verbally that it will end the occupation but we do not know what the real ambition of the invaders is. They could yet say there is no stability in the country and extend their presence there.

"The US has already said that 50,000 troops will remain in Iraq for what they say is training Iraqi troops. But I think that every Iraqi wants US troops out of the country because what has occurred is the shattering of the Iraqi society."

The Shia community in Baghdad has been hit by a series of bomb attacks in recent weeks, fuelling fears that Iraqi soldiers could face an uphill struggle in keeping the capital secure when US forces leave Iraq.

At least seven people were killed and 23 injured when a bomb planted in a plastic bag exploded close to the site of a Shia mosque in Baghdad’s Kadhimiyah district on Wednesday.

Nine people had been killed the day before in a car bomb blast in the same neighbourhood.

At least 37 people were killed and more than 100 hurt in a string of attacks across the city on Monday.