US Cities Increasing Use of Armed Mercenaries to Replace Police

From Iraq to the streets of American cities, the deployment of private security forces - including Israeli commandos - to take the place of police officers has spiked significantly and is raising grave concerns. Few areas have seen as dramatic a transformation to privatized services as the world of intelligence and domestic law enforcement. This is an ominous, accelerating trend which thrives on US tax-payer money and prospers in a legal limbo devoid of clear regulatory criteria or accountability mechanisms, leaving the door open for serious abuses. In the words of former CIA division chief and senior analyst Melvin Goodman: "the entire industry is essentially out of control; it’s dangerous!". 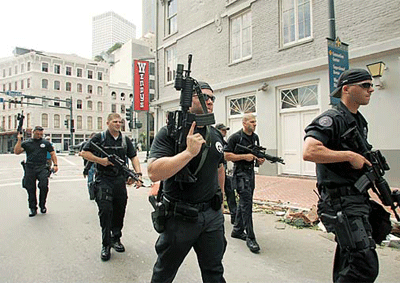 The United States is in the midst of the most radical privatization agenda in its history. We see this in schools, health care, prisons, and certainly with the US military/national security/intelligence apparatus. There are almost 200,000 “private contractors” in Iraq (more than US soldiers) and Obama is continuing to use mercenaries there and in Afghanistan and Israel/Palestine. At present, 70 percent of the US intelligence budget is going to private companies.

This privatization trend is hardly new, but it is accelerating. While events such as the Nisour Square massacre committed in September 2007 by Blackwater operatives in Baghdad show the lethal danger of unleashing mercenary forces on foreign soil, one area with the potential for extreme abuses resulting from this privatization is in domestic law enforcement in the US. Many people may not be aware of this, but since the 1980s, private security guards have outnumbered police officers. “The more than 1 million contract security officers, and an equal number of guards estimated to work directly for U.S. corporations, dwarf the nearly 700,000 sworn law enforcement officers in the United States,” according to The Washington Post. Some estimate that private security actually operate inside the US at a 5-to-1 ratio with police.

In New Orleans in the aftermath of Hurricane Katrina and the flooding of the city, private security poured in. Armed operatives from companies like Blackwater, Wackenhut, Intercon and DynCorp spread out in the city. Within two weeks of the hurricane, the number of private security companies registered in Louisiana jumped from 185 to 235. In New Orleans at the time, I interviewed Israeli commandos from a company called Instinctive Shooting International as they operated an armed checkpoint on Charles Street after having been hired by a wealthy businessman. I also interviewed private guards who bragged of shooting “black gangbangers.” The abuses by private security guards in New Orleans and elsewhere has not to this day been thoroughly investigated. Moreover, the legality and constitutionality of the deployment of these modern day Pinkertons needs to be seriously explained to the US public.

Now it seems that some cities think it is a great idea to expand the use of these private forces using tax-payer funds. The Wall Street Journal this week reported, “Facing pressure to crack down on crime amid a record budget deficit, Oakland is joining other U.S. cities that are turning over more law-enforcement duties to private armed guards. The City Council recently voted to hire International Services Inc., a private security agency, to patrol crime-plagued districts. While a few Oakland retail districts previously have pooled cash to pay for unarmed security services, using public funds to pay for private armed guards would mark a first for the city.”

In a stunning development revealed late Wednesday night, Oakland dropped its plan to hire International Services Inc. after the firm’s founder and two other executives were arrested on charges of defrauding the state of California out of more than $9 million in workers compensation.

Just because this particular company may be going down in flames, that doesn’t seem to deter Oakland’s advocates for using private forces. According to the WSJ:

Ignacio De La Fuente, a city council member who led the drive to hire armed guards, said he will push to retain another security service. “There is still a very serious need for security in some of our more crime-plagued areas,” he said. Before selecting [International Services Inc.], Mr. De La Fuente said, he and representatives of Oakland’s police department interviewed security candidates and found nothing out of the ordinary.

Regardless of the specific company, this trend toward hiring private security companies is an ominous development. As it is, Oakland (and many other cities) have severe problems holding accountable police (and other law enforcement) for brutality and extrajudicial killings. “Oakland, unfortunately, has had a history of treating the African-American community unfairly,” said George Holland Sr., an attorney who heads the Oakland chapter of the National Association for the Advancement of Colored People. “The community has a great distrust for police officers because they feel they can’t be punished.”

Most recently, the January execution-style murder of Oscar Grant, a 22 year old unarmed African-American man, on a (Bay Area Rapid Transit) BART train platform by a BART officer, has sparked outrage. A decision is still pending on whether the officer in that case will be tried for murder. With activist groups already decrying the state of police/law enforcement oversight in the city, some powerful officials in Oakland want to use private armed operatives with fewer mechanisms for accountability than the police. Why do some Oakland officials want this? On the one hand, the belief that it will bring security, but also to save money:

Hiring private guards is less expensive than hiring new officers. Oakland — facing a record $80 million budget shortfall — spends about 65% of its budget for police and fire services, including about $250,000 annually, including benefits and salary, on each police officer.

In contrast, for about $200,000 a year the city can contract to hire four private guards to patrol the troubled East Oakland district where four on-duty police officers were killed in March. And the company, not the city, is responsible for insurance for the guards.

As in many cities, this is a contentious issue in Oakland, which has struggled to deal with substantial violence on the one hand and police brutality on the other. According to the San Francisco Chronicle:

The areas where the armed guards were supposed to have been deployed have a disproportionate share of homicides, assaults with deadly weapons and robberies… The crime rate in the area, according to a 2003 blight study, is between 225 and 150 percent higher than the city as a whole.

Shortly after the Grant killing, Oakland Mayor Ron Dellums tabled the hiring of the private guards, putting him in opposition to local council members who faced pressure from businesses to hire private security guards to patrol the streets. “The same way you had problems with a BART cop killing somebody, what happens if a guard who doesn’t have the same training as a police officer shoots somebody?” said City Administrator Dan Lindheim. “It’s not worth the risk.” Predictably, the Oakland police opposed the deployment of private security for union and overtime reasons.

John Macdonald, a criminology professor at the University of Pennsylvania who did a study on private security for the Rand Corporation told the WSJ he opposes turning to a private security service to take the place of police officers. “If an unfortunate event were to happen,” he says, “it could cost the public more in the long term than what the city believes it could save.”

That’s very true. But money is just one issue. More pressing is, who will be responsible if these guards kill an unarmed kid? What happens if they unlawfully detain people? The most urgent question now is what can the public can do to preemptively protect itself from unaccountable private forces?

Here are some questions (obviously there are many more) that should be publicly answered by Oakland and any other city that wants to use these private forces in a “law enforcement” capacity before these forces deploy on the streets:

Oakland is certainly not alone in looking to private security. This is an issue that is going to be increasingly popping up in cities across the US. It is also becoming a major issue on the US-Mexico border, as mercenary companies offer privatized border agents to the US government. If the public isn’t vigilant, this will metastasize rapidly.

Jeremy Scahill is an American investigative journalist with expertise on a number of global issues, most notably the recent rise of private military companies (PMCs). He serves as a correspondent for the U.S. radio and TV program Democracy Now!. He is also a Puffin Foundation Writing Fellow at The Nation Institute and a frequent contributor to The Nation. Scahill and colleague Amy Goodman were co-recipients of the 1998 Polk Award for their radio documentary "Drilling and Killing: Chevron and Nigeria’s Oil Dictatorship", which investigated the Chevron Corporation’s role in the killing of two Nigerian environmental activists. He is also the author of "Blackwater: The Rise of the World’s Most Powerful Mercenary Army"

US Soldiers in Afghanistan Told to "hunt people for Jesus... so we get them into the kingdom" (video)

Academi (ex-Blackwater) was not sold (correction)