Following in the footsteps of well over 1,000 scientists and other professional groups who have already gone on record questioning the official theory, more than 40 U.S. Counter-Terrorism and Intelligence Agency veterans have come forward to challenge the Government’s rendition of the September 11, 2001 attacks. Their behind-the-scenes knowledge and experience of sensitive and classified issues places them in a uniquely authoritative position. In this sense, their critical stance is all the more damning for the government. Conspicuously absent from the landscape are the mainstream media professionals, as they continue to provide cover for the government’s totally bankrupt theory and fail to report on landmark developments such as this. 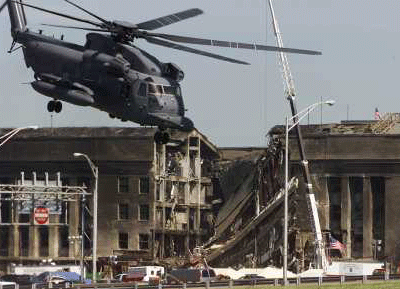 The Pentagon after the collapse of the impacted wall.

Official Account of 9/11:“Terribly Flawed,” “Laced with Contradictions,” “a Joke,” “a Cover-up”

More than 40 U.S. Counter-Terrorism and Intelligence Agency veterans have severely criticized the official account of 9/11 and most have called for a new investigation. It is outrageous that most Americans are entirely unaware of their publicly stated concerns — a direct result of the refusal of national print and broadcast news organizations to cover this extremely important issue. There is no denying the credibility of these individuals or their loyalty to their country as demonstrated by their years of service collecting and analyzing information and planning and carrying out operations critical to the national security of the United States.

These 41 individuals formerly served in the U.S. State Department, the National Security Agency, the Central Intelligence Agency, the Federal Bureau of Investigation, the Federal Aviation Administration, U.S. Customs and Border Protection and the branches of the U.S. Military. They are listed below by their branch of service. [To read their individual statements and full complementary information, see attached document "Counterterrorism Veterans"].

Terrell E. Arnold, MA - Former Deputy Director of Counter- Terrorism and Emergency Planning, U.S. State Department. Mr. Arnold is a leading expert on terrorism and counter-terrorism and the author of several books on the subjects.

Raymond McGovern - A 27-year veteran of the CIA, who chaired National Intelligence Estimates during the 1970’s

Melvin Goodman, PhD - Former senior CIA official who served as Division Chief of the CIA’s Office of Soviet Affairs and Senior Analyst from 1966 - 1990. He also served as Professor of International Security at the National War College 1986 - 2004.

Robert Baer - A 21-year CIA veteran and specialist in the Middle East, he was awarded the Career Intelligence Medal upon his retirement in 1997.

Robert David Steele - Is currently the CEO of OSS.net, a proponent of Open Source Intelligence. He has 25 years of combined service in the CIA and the U.S. Marine Corps. He also served as the second ranking civilian (GS-14) in U.S. Marine Corps Intelligence from 1988 - 1992 and was a member of the adjunct faculty of Marine Corps University.

David MacMichael, PhD – Former Senior Estimates Officer at the CIA with special responsibility for western hemisphere affairs at the CIA’s National Intelligence Council. Prior to that, he served as a U.S. Marine Corps officer for ten years and for four years as a counter-insurgency advisor to the government.

Lynne Larkin – Former CIA Operations Officer who served in several CIA foreign stations before being assigned to the CIA’s Counter-Intelligence Center where she co-chaired a multiagency task force for coordinating intelligence efforts among the many intelligence and law enforcement agencies.

Sibel D. Edmonds – Witness before the 9/11 Commission. Former Language Translation Specialist, performing translations for counterterrorism and counterintelligence operations, FBI. She is founder and president of the National Security Whistleblowers Coalition.

Coleen Rowley – Former Special Agent and Minneapolis Division Counsel, FBI. 24-year FBI career. Agent Rowley was selected one of Time Magazine’s three 2002 Persons of the Year for revealing FBI headquarters’ efforts to “throw up roadblocks and undermine” FBI field investigations of al-Qaida operatives in the four weeks prior to 9/11.

Morton Goulder (1921 – 2008) - was appointed Deputy Assistant Secretary of Defense for Intelligence and Warning under President Richard Nixon and continued in that capacity under Presidents Gerald Ford and Jimmy Carter. In World War II, he served as a Lt. Commander in the U.S. Navy. He was a cofounder of Sanders Associates, a large defense contractor.

Senator Mike Gravel – Former U.S. Army officer, serving as the Adjutant in the Communications Intelligence Service in Germany and as a Special Agent in the Counter Intelligence Corps in France. Former U.S. Senator from Alaska, best known for entering over 4,000 pages of the Pentagon Papers into the U.S. Senate record, thus making public the secret official study that revealed the lies and manipulations of successive U.S. administrations that misled the country into the Vietnam War.

Theodore J. Pahle – Former Senior Intelligence Officer with the Defense Intelligence Agency. His 37-year intelligence career was exclusively as a HUMINT (Human Intelligence) operations officer with DIA, Office of Naval Intelligence and U.S. Army Intelligence. He is a Middle East and Latin American operations specialist. Today, he continues to support the HUMINT effort as a contract instructor.

Statements questioning the official account of 9/11 and calls for a new investigation by over 1,000 credible individuals can be found at the author’s website:
http://PatriotsQuestion911.com.