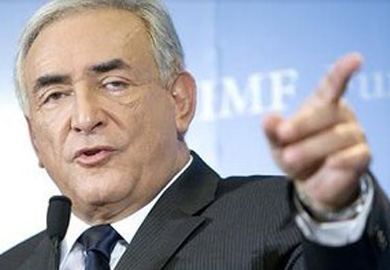 For decades they have enforced the deregulation measures and structural adjustment programmes that have led to the current impasse. After this total fiasco the WB and the IMF must now account for their decisions before world opinion.

In addition, their economic forecasts are less than reliable. In November 2008 the IMF predicted a 2.2% global growth in 2009, then downsized it to 0.5% in January, finally acknowledging it would be negative in March. The reality, its experts are siding with major creditors against citizens whose fundamental rights are less and less respected.

While the economic context is fast deteriorating, the world’s big moneylenders are trying to keep the upper hand while placing a discredited and delegitimized IMF in the role of white knight — helping the poor and downtrodden to face the damages wrought by this current crisis. But the opposite is true. The principles defended by the IMF since the 1980s and denounced by CADTM since its inception are still the same. Governments that sign an agreement with the IMF in order to obtain a loan must still implement the same toxic recipes that aggravate the living conditions of their country’s people.

Responding to pressure from the IMF under the leadership of Dominique Strauss-Kahn, several countries faced with the consequences of the crisis have sliced workers’ wages and social benefits. Latvia reduced its civil servants’ incomes by 15%, Hungary suppressed their 13th month (after reducing retirement benefits as part of a former agreement) and Romania is about to move in the same direction. The potion is so bitter that some governments are reluctant to administer it. The Ukraine recently declared the conditions imposed by the IMF to be ‘unacceptable’, especially the gradual raising of retirement age and increased housing costs.

It is high time to expose the doublespeak of the IMF and of Dominique Strauss-Kahn, who on the one hand expect the international commununity to increase its efforts to reach the unambitious Millenium Development Goals, and on the other, compel governments calling upon IMF help to reduce the salaries of their civil servants. This is the opposite of a policy genuinely aimed at facing the crisis while protecting the interests of its victims.

To respond to the crisis of the 1930s and pressured by social mobilization, the US president Franklin Roosevelt reduced working hours while maintaining salaries, social benefits and workers’ rights, such as the right to join trade unions. With the New Deal, Roosevelt set up a tax reform that raised levies on capital. Dominique Strauss-Kahn, a so-called “socialist”, hardly measures up to Roosevelt’s stature and persists against all odds in protecting the interests of the creditors who appointed him to this handsomely paid position.

Once more the IMF is shown to be a compliant instrument in the hands of those who are responsible for the current crisis. In a period of severe monetary destabilization (as evidenced by the huge variations in parity between the dollar and the euro over the past year), the IMF proves incapable of implementing a tax of the Tobin-Spahn kind that would reduce exchange rate variations by controlling speculation, and that would provide the funds needed to put an end to poverty and make development possible. Since the IMF was founded in 1944, its missions explicitly include promoting full employment, which means that the institution is in breach of its own statutes.

The global economic and financial crisis highlights the failure of the deregulated financial markets and freewheeling capital flow advocated by the IMF. A new international architecture is called for, based on the International Covenant on Economic, Social and Cultural Rights (1966) and the UN Declaration on the Right to Development (1986). Yet this logic will not prevail while the balance of power remains unchanged. Unless a sufficient number of governments respond to popular pressure and set up such an alternative, the World Bank and the IMF will be able to get over the current crisis, taking advantage of falling export commodity prices to bring weakened poor countries into a new state of loan dependency, with a central aim of saving the system, and not of meeting human and environmental criteria.

For all these reasons, the only acceptable solution is the immediate abolition of the IMF and the WB, and their replacement by radically different institutions that focus on satisfying fundamental human needs.

Secretary-General of the Committee for the Abolition of the Third World Debt (CADTM). He is co-author of Who Owes Who? 50 Questions about World Debt, Zed Books, London, 2004.

Why is there rampant famine in the 21st century and how can it be eradicated?

A G20 Meeting for Naught

Doctor in political science from the Liège and Paris VIII Universities. President of CADTM-Belgium, member of the International Council of the World Social Forum and of the CAIC Commission for the Integral Audit of the Public Debt (Ecuador). His latest book in French : La crise, quelles crises ? (with Damien Millet, Aden 2010) ; in English : Debt, the IMF, and the World Bank: Sixty Questions, Sixty Answers.

Eight key proposals for another Europe

The U.S. and its unruly Latin American ’backyard’

Economy: Obama chooses those who have a record of failure
The new US administration