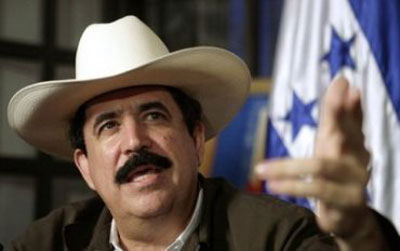 In his article of June, 29, 2009, Thierry Meyssan submitted that the overthrow of President Zelaya in Honduras [1] had been orchestrated by SouthCom. Moreover, the French edition of his article, in one of the photo captions, underscored the fact that the commander of the US military base at Soto Cano is none other than Colonel Richard A. Juergens, who had already supervised the "kidnapping" of Haitian President Jean-Bertrand Aristide according to a similar scenario.

Despite widespread media coverage, this information was rebuffed by the State Department which denied any US interference in the military coup d’état.

As it turns out, the flight path followed by the aircraft involved in President Zelaya’s expulsion was rendered public on August 14, 2009, by Daniel Ortega, the President of Nicaragua. It reveals that the flight took off from the US military base of Soto Cano (formerly known as Palmerola Air Base).

The United States appoints the President of Honduras