Solana : « Israel is a member of the European Union» 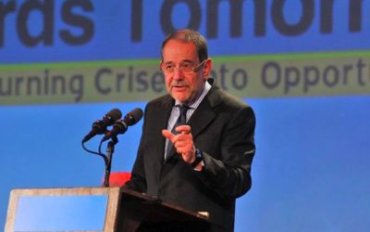 But it was the round table on "Turning Crisis into Opportunity" that created a sensation. The participants were artificial intelligence specialist Raymond Kurzweil (member of the US Army Science Advisory Board), French essayist Bernard-Henri Levy, jurist Ruth Gavinson (former member of the Winograd Commission) and diplomat Javier Solana (former NATO Secretary-General and, currently, High Representative of the European Union.

A very fit Solana declared: "Allow me to say that Israel is a member of the European Union without being a member of its institutions". He added that Israel is an "integral part of all EU programmes", contributing with its eminent know-how in leading technologies.

He pointed out that while not being a candidate for admission, Israel has closer ties to the European Union than even those countries which are poised for membership. He assured the audience that Brussels was doing its utmost on the Iranian issue. He concluded by saying that Israel was not responsible for the sluggish pace of the Israeli-Palestinian peace process, which was simply due to a problem of methodology.