Obama names co-chairmen of the President’s Intelligence Advisory Board 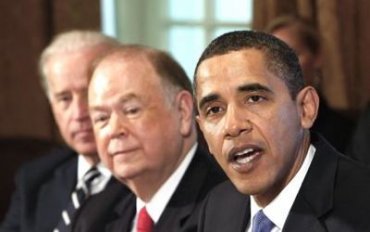 Chuck Hagel, a left-leaning Republican, had spoken out against the Bush Administration’s adventurous policy in Iraq. He developed a close personal relationship with Democratic Senator Barack Obama during their official visit to Afghanistan and Iraq in 2007, before refusing to campaign in favour of his old friend John McCain due to their diverging views on Iraq. Hagel’s wife was ostensibly seen in public with Michelle Obama during the presidential campaign.
Chuck Hagel is a member of various entities, such as the Council on Foreign Relations and the Bilderberg Group; he administers the American Security Project and is member of the Aspen Strategy Group. He succeeded General Jones as Chairman of the Atlantic Council and has already been named by Robert Gates to the Defense Policy Board.

David L. Boren is part of a politically-prominent family dynasty from Oklahoma and his son holds a seat at the House of Representatives. He is a member of the Democratic Party with right-wing tendencies, to such an extent that he made several attemps to create a new party first with Ross Perot and subsequently with Michael Bloomberg. Bill Clinton came short of naming Boren his Secretary of Defense, but preferred to maintain him in his congressional functions as President of the Information Review Commission. In this position, he supervised a vast funding programme for universities that brought them within the purview of the CIA (National Security Education Act); the Agency introduced compulsory themes of investigation and used US students abroad for intelligence assignments.
After leaving the Senate, Boren succeeded in having George Tenet, his former chief of staff, appointed as Head of the CIA. He himself became President of the University of Oklahoma where he continues his activities for the academic training of CIA staff. Moreover, he sits on the Board of Directors of Texas Instruments.