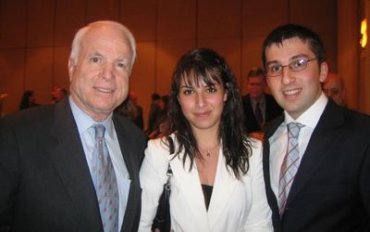 The investigation into the illegal network known as Ergenekon, which was plotting to overthrow the Erdogan Government and replace it by a pro-U.S. military dictatorship, revealed that this terrorist organisation was a remodeled version of the Turkish Gladio. However, Ergenekon didn’t receive orders only from NATO; it allegedly also maintained close ties with the Mossad through Rabbi Tuncay Guney.

It shouldn’t be surprising, therefore, that on 18 November 2009 a seminar was held at the U.S. Congress to deny the existence of Ergenekon, putting it down as a myth invented by the Erdogan Government to discredit Army Chief of Staff, General Mehmet Yaşar Büyükanıt, and the U.S.-friendly officers in his entourage, in the hope of imposing an Islamic state.

The participants stressed that the United States should intervene urgently to stop the trial, but should not do so openly since it would feed into the "conspiracy theories" purporting that NATO has set up a "Deep State" in Turkey which has manipulated or attempted to manipulate public institutions for decades.

The seminar was organised by the ARI Foundation, a low-profile think-tank bent on promoting relations between Washington and Ankara. Actually, ARI is a front for the Atlanticist-Israeli lobby. In accordance with Robert Strausz-Hupé’s policies, ARI is promoting a Tel-Aviv-Ankara axis under NATO auspices for the control of the Middle East.

The ARI Foundation was created in Washington in the immediate aftermath of the September 11 attacks. For the past two years, it has published a political policy review, Turkish Policy Quarterly. It enjoys close ties with AIPAC (American Israel Public Affairs Committee) and JINSA (Jewish Institute for National Security Affairs). Its chairman, Yurter Ozcan, is on WINEP’s payroll (Washington Institute for Near East Policy).
Antony Blinken, National Security Adviser to Vice President Joseph Biden, figures among ARI’s most active members.

Important Correction, by the current president of ARI Foundation

1) ARI has never been and will never be "a front for the Atlanticist-Israeli lobby". Our institution has many connections in DC including some Israeli institutions like JINSA. However, one thing ARI praises itself for is its equal distance from all sides of the political spectrum. We are open to collaborations with many institutions on a project/meeting basis and by looking at our past events you can easily find that out (http://arifoundation.org/programs.html). ARI is an independent institution with a mission to promote Turkish-American relations based on facts and information.

2) It is accurate that our previous president, Yurter Ozcan, is currently working at Washington Institute for Near East Policy. However, he resigned from his position as the president (in July 2009) before accepting WINEP’s offer due to conflict of interest. If you were at the Capitol Hill event you mentioned in your writings you would have this information.

3) The picture you have is from 2007 JINSA Annual Dinner however people’s names from left to right is: John McCain, Selvin Akkus (not Duygu Ozcan) and Yurter Ozcan.

Source : “The Israeli Lobby appeals before the US Congress to stop the Ergenekon trial in Turkey”, Voltaire Network, 21 November 2009, www.voltairenet.org/article163027.html

Source : “The Israeli Lobby appeals before the US Congress to stop the Ergenekon trial in Turkey”, Voltaire Network, 21 November 2009, www.voltairenet.org/article163027.html