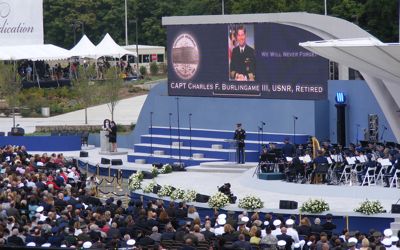 According to the Kean-Hamilton Commission report, on September 11, 2001 flight AA77 was allegedly highjacked and deliberately crashed into the Pentagon.

The report states that the hijacking took place between 08:51 (time of last radio contact) and 08:45 (time of deviation from normal flight path); the flight disappeared from radar screens at 08:56 when the transponders were disabled. It wasn’t until 09:32 that the Civil Aviation Authority detected a plane approaching Washington, which it inferred to be flight AA77.

The report also states that two passengers, flight attendant Renée May and television commentator Barbara Olson, made phone calls to close relatives indicating that the flight was being hijacked by six individuals (rather than five) wielding boxcutters. According to United States Solicitor General Ted Olson, his wife told him that the passengers and the crew had been herded together to the back of the plane, and asked him "what do I tell the pilot to do?".

However, these assertions have already been invalidated by an FBI investigation presented at the 2006 Massaoui trial. The FBI established that in 2001 it was materially impossible to make a cell phone connection at that flying altitude and, what is more, that the telephone companies had no record of any telephone activity for either of these clients.

Declassified data obtained by Pilots for 9/11 Truth from the National Transportation Safety Board (NTSB), and more recently also processed and endorsed by independent sources in Australia, reveals the existence of a "CI" data parameter labeled "Flight Deck Door". According to the "CI" recording, the cockpit door remained locked throughout the flight, rendering any movements in or out of the cockpit impossible.
In those circumstances, only flight commander Charles F. Burlingame and his co-pilot David Charlebois could have been inside the cockpit when the flight deviated from course.

Former U.S. Navy F-4 Phantom jet pilot, Charles F. Burlingame also served as Pentagon spokesman during Operation Desert Storm. He was in charge of an attack simulation exercise, helping to craft response plans in the event of a commercial airliner hitting the Pentagon. By virtue of an ad hoc law, his presumed remains were buried at the prestigious Arlington National Military Cemetary, notwithstanding his civilian status at the time of death.
His sister Debra Burlingame co-chairs with Liz Cheney (former Vice-President Cheney’s daughter) the Keep America Safe association.