The Dovletabat-Sarakhs-Khangiran gas pipeline, a major joint venture by Iran and Turkmenistan, was inaugurated on 6 January 2010. This huge development could truly constitute a game-changer in the "Great Game" of energy dominance. The United States’ pipeline diplomacy in the Caspian has been checkmated by its competitors without, incidentally, the aggression and bloodshed that the US has resorted to in just trying to secure the corridors. If the future of energy is not oil but gas, then the control of the Middle East could well be tied to that of the Caspian Sea Basin.

The inauguration of the Dauletabad-Sarakhs-Khangiran pipeline in early January connecting Iran’s northern Caspian region with Turkmenistan’s vast gas field may go unnoticed amid the Western media cacophony that it is "apocalypse now" for the Islamic regime in Tehran.

The event sends strong messages for regional security. Within the space of three weeks, Turkmenistan has committed its entire gas exports to China, Russia and Iran. It has no urgent need of the pipelines that the United States and the European Union have been advancing. Are we hearing the faint notes of a Russia-China-Iran symphony?

The 182-kilometer Turkmen-Iranian pipeline starts modestly with the pumping of 8 billion cubic meters (bcm) of Turkmen gas. But its annual capacity is 20bcm, and that would meet the energy requirements of Iran’s Caspian region and enable Tehran to free its own gas production in the southern fields for export. The mutual interest is perfect: Ashgabat gets an assured market next door; northern Iran can consume without fear of winter shortages; Tehran can generate more surplus for exports; Turkmenistan can seek transportation routes to the world market via Iran; and Iran can aspire to take advantage of its excellent geographical location as a hub for the Turkmen exports. 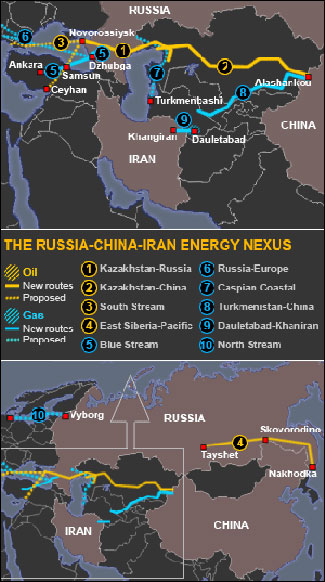 We are witnessing a new pattern of energy cooperation at the regional level that dispenses with Big Oil. Russia traditionally takes the lead. China and Iran follow the example. Russia, Iran and Turkmenistan hold respectively the world’s largest, second-largest and fourth-largest gas reserves. And China will be consumer par excellence in this century. The matter is of profound consequence to the US global strategy.

The Turkmen-Iranian pipeline mocks the US’s Iran policy. The US is threatening Iran with new sanctions and claims Tehran is "increasingly isolated". But Mahmud Ahmadinejad’s presidential jet winds its way through a Central Asian tour and lands in Ashgabat for a red-carpet welcome by his Turkmen counterpart, Gurbanguly Berdymukhammedov, and a new economic axis emerges. Washington’s coercive diplomacy hasn’t worked. Turkmenistan, with a gross domestic product of US$18.3 billion, defied the sole superpower (GDP of $14.2 trillion) - and, worse still, made it look routine.

There are subplots, too. Tehran claims to have a deal with Ankara to transport Turkmen gas to Turkey via the existing 2,577km pipeline connecting Tabriz in northwestern Iran with Ankara. Indeed, Turkish diplomacy has an independent foreign-policy orientation. Turkey also aspires to be a hub for Europe’s energy supplies. Europe may be losing the battle for establishing direct access to the Caspian.

Second, Russia does not seem perturbed by China tapping into Central Asian energy. Europe’s need for Russian energy imports has dropped and Central Asian energy-producing countries are tapping China’s market. From the Russian point of view, China’s imports should not deprive it of energy (for its domestic consumption or exports). Russia has established deep enough presence in the Central Asian and Caspian energy sector to ensure it faces no energy shortage.

What matters most to Russia is that its dominant role as Europe’s No 1 energy provider is not eroded. So long as the Central Asian countries have no pressing need for new US-backed trans-Caspian pipelines, Russia is satisfied.

During his recent visit to Ashgabat, Russian President Dmitry Medvedev normalized Russian-Turkmen energy ties. The restoration of ties with Turkmenistan is a major breakthrough for both countries. One, a frozen relationship is being resumed substantially, whereby Turkmenistan will maintain an annual supply of 30bcm to Russia. Two, to quote Medvedev, "For the first time in the history of Russian-Turkmen relations, gas supplies will be carried out based on a price formula that is absolutely in line with European gas market conditions." Russian commentators say Gazprom will find it unprofitable to buy Turkmen gas and if Moscow has chosen to pay a high price, that is primarily because of its resolve not to leave gas that could be used in alternative pipelines, above all in the US-backed Nabucco project. Third, contrary to Western propaganda, Ashgabat does not see the Chinese pipeline as a substitute for Gazprom. Russia’s pricing policy ensures that Ashgabat views Gazprom as an irreplaceable customer. The export price of the Turkmen gas to be sold to China is still under negotiation and the agreed price simply cannot match the Russian offer.

Fourth, Russia and Turkmenistan reiterated their commitment to the Caspian Coastal Pipeline (which will run along the Caspian’s east coast toward Russia) with a capacity of 30bcm. Evidently, Russia hopes to cluster additional Central Asian gas from Turkmenistan (and Kazakhstan).

Fifth, Moscow and Ashgabat agreed to build jointly an east-west pipeline connecting all Turkmen gas fields to a single network so that the pipelines leading toward Russia, Iran and China can draw from any of the fields.

Indeed, against the backdrop of the intensification of the US push toward Central Asia, Medvedev’s visit to Ashgabat impacted on regional security. At the joint press conference with Medvedev, Berdymukhammedov said the views of Turkmenistan and Russia on the regional processes, particularly in Central Asia and the Caspian region, were generally the same. He underlined that the two countries were of the view that the security of one cannot be achieved at the expense of the other. Medvedev agreed that there was similarity or unanimity between the two countries on issues related to security and confirmed their readiness to work together.

The United States’ pipeline diplomacy in the Caspian, which strove to bypass Russia, elbow out China and isolate Iran, has foundered. Russia is now planning to double its intake of Azerbaijani gas, which further cuts into the Western efforts to engage Baku as a supplier for Nabucco. In tandem with Russia, Iran is also emerging as a consumer of Azerbaijani gas. In December, Azerbaijan inked an agreement to deliver gas to Iran through the 1,400km Kazi-Magomed-Astara pipeline.

The "big picture" is that Russia’s South Stream and North Stream, which will supply gas to northern and southern Europe, have gained irreversible momentum. The stumbling blocks for North Stream have been cleared as Denmark (in October), Finland and Sweden (in November) and Germany (in December) approved the project from the environmental angle. The pipeline’s construction will commence in the spring.

The $12-billion pipeline built jointly by Gazprom, Germany’s E.ON Ruhrgas and BASF-Wintershall, and the Dutch gas transportation firm Gasunie bypasses the Soviet-era transit routes via Ukraine, Poland and Belarus and runs from the northwestern Russian port of Vyborg to the German port of Greifswald along a 1,220km route under the Baltic Sea. The first leg of the project with a carrying capacity of 27.5bcm annually will be completed next year and the capacity will double by 2012. North Stream will profoundly affect the geopolitics of Eurasia, trans-Atlantic equations and Russia’s ties with Europe.

To be sure, 2009 proved to be a momentous year for the "energy war". The Chinese pipeline inaugurated by President Hu Jintao on December 14; the oil terminal near the port city of Nakhodka in Russia’s far east inaugurated by Prime Minister Vladimir Putin on December 27 (which will be served by the mammoth $22-billion oil pipeline from the new fields in eastern Siberia leading to China and the Asia-Pacific markets); and the Iranian pipeline inaugurated by Ahmadinejad on January 6 - the energy map of Eurasia and the Caspian has been virtually redrawn.

The year 2010 begins on a fascinating new note: will Russia, China and Iran coordinate future moves or at least harmonize their competing interests?

Tehran reaches out to Egypt’s Morsi

Iran, the gas pipeline battle
THE ART OF WAR