Angela Merkel, who claims to be more Zionist than any other German Chancellor before her, is pursuing a personal policy of unconditional support to the State of Israel which is at variance with the official stance of her country in favour of an equitable peace between Palestinians and Israelis. This attitude is paralyzing the European Union in the Middle East, observes the New York Times correspondent in Berlin. 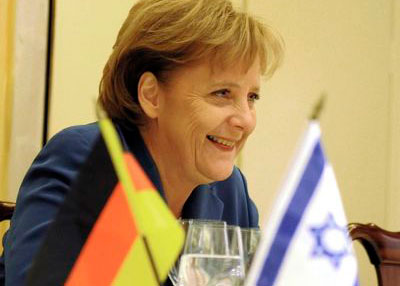 There are some foreign policy issues that Angela Merkel does not like to talk about. One is Afghanistan. The other is the Israeli-Palestinian conflict. So when she was asked about Israel’s settlement policy and the blockade of Gaza during a joint news conference with the Israeli prime minister, Benjamin Netanyahu, she minimized the issue. [1] It was time to restart the peace process, she said, moving quickly to another topic.

German leaders find it very difficult to criticize Israel because of the responsibility Germany bears for the Holocaust and their commitment to the existence of the state of Israel. This is true of Mrs. Merkel in particular, who wants to forge a much closer relationship with Israel. The chancellor’s position has made it even more difficult for the European Union to speak with one voice on the Middle East.

But Mrs. Merkel’s policy is inconsistent. When she was first elected chancellor in late 2005, she placed much emphasis on human rights and freedom. She criticized China’s human rights policy and made the highly controversial decision to meet the Dalai Lama, the exiled Tibetan spiritual leader, in the Chancellery in 2007. China warned of dire consequences, such as severing lucrative trade contracts. Apart from the cancellation of a few high-level meetings, little happened.

When Mrs. Merkel met nongovernmental organizations that Vladimir V. Putin had tried to ban, the relationship between Berlin and Moscow became frosty. That was all.

But as far as the Middle East is concerned, Mrs. Merkel has paid scant attention to the miserable living conditions of Palestinians in Gaza as well as Israel’s settlements and detention policies. German legislators and analysts say that of all chancellors of the postwar period, Mrs. Merkel is considered the most pro-Israeli. “The chancellor is particularly close to Israel,” said one conservative legislator, Ruprecht Polenz, who is chairman of the Foreign Affairs Committee of the German Parliament.

So close that Mrs. Merkel was muted in her criticism of Israel’s bombing of the Gaza Strip in late 2008, which killed many civilians. In contrast, when the Iranian authorities used force last year against the opposition, which was claiming that the presidential elections had been rigged, Mrs. Merkel took an admirable stance, becoming one of the few leaders to publicly criticize the regime, even calling for new elections.

Mr. Polenz says that every German chancellor is responsible, rightly, for defending Israel because of the Holocaust. When it comes to Berlin’s relationship with the Middle East, “we are not neutral,” he said. “But that does not mean we cannot speak our minds to our Israeli friends.”

It is different with Mrs. Merkel. As chancellor, she set herself three foreign policy objectives: better relations with the United States, a much closer relationship with Israel and the integration of the European Union. These issues, said Gerd Langguth, a political science professor at Bonn University and Mrs. Merkel’s biographer, “are what Mrs. Merkel inherently believes in.”

Since the global financial meltdown, relations between the chancellery and President Barack Obama have become strained, not least because the United States openly criticized Germany for not doing enough to stem the crisis. As for E.U. integration, which depends on France and Germany cooperating, it has gone nowhere. Mrs. Merkel and the French president, Nicolas Sarkozy, have proposed no new initiatives that would make Europe more coherent and credible as a global player. Mrs. Merkel has also often put German interests before Europe’s.

The only success is Israel. “Mrs. Merkel has an emotional relationship with Israel and the Jewish people,” Mr. Langguth said.

Mrs. Merkel has embarked on her own particular policy toward Israel, pursuing a special relationship even after the Gaza bombings. Against the advice of German diplomats, Mrs. Merkel, who is also leader of the conservative Christian Democratic Union party, which is a staunch defender of Israel, referred to Israel as a “Jewish state” in the government’s coalition agreement with the Free Democrats last October. Israelis were delighted. “It is our policy that other states recognize Israel as a Jewish state,” said Professor Efraim Inbar, director of the Begin-Sadat Center for Strategic Studies at Bar-Ilan University, near Tel Aviv.

No wonder then that the meeting Monday in Berlin was significant. It was the first time the German and Israeli cabinets ever met jointly in Germany. Mrs. Merkel initiated these special consultations, reserved only for a few countries, including France, Poland and Russia, after her 2008 visit to Israel, where she was given the rare honor of addressing the Knesset, the Israeli Parliament.

Muriel Asseburg, a Middle East expert at the German Institute for International and Security Affairs in Berlin, said Mrs. Merkel’s policy toward Israel was linked to the fact that she was raised in Communist East Germany.

“It has much to do with the former East Germany. It did not recognize Israel and did not assume responsibility for the Third Reich, the Second World War and the Holocaust. Merkel has tried to distance herself from that stance and to compensate for that East German past,” Ms. Asseburg said.

So while Mrs. Merkel does say, as she said on Monday, that it is time for Israel and the Palestinians to become re-engaged in a peace process, Ms. Assenburg says Mrs. Merkel “would not publicly take a critical stance of Israel’s policies and the occupation.” Her goal is not to make the peace process a priority in Germany’s relations with Israel. It is to have ever closer relations with Israel, regardless of the conflict.

This runs against the official German position of unequivocal support for the peace process and a two-state solution so as to realize both Israel’s security and Palestinian aspirations. But analysts say that policy is not pursued. “A critical stance with regard to the occupation and settlement policies as well as active German engagement in the peace process should actually follow from Germany’s historical responsibility and not fall under the taboo of the Holocaust,” Ms. Asseburg argued.

It will not happen under Mrs. Merkel. It means that Israel, much criticized by some other E.U. countries, will always have a special ally in Europe, and Europe, for the foreseeable future, will remain unable to wield influence in helping end the Israeli-Palestinian conflict.