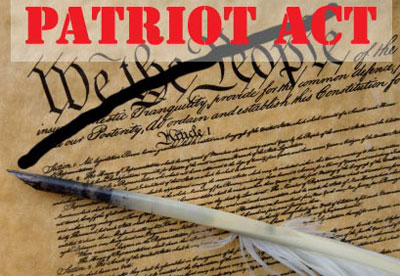 President Obama just signed a one year extension of several provisions in the nation’s main counterterrorism law, the Patriot Act.
Had he done nothing, the provisions of the Patriot Act would have expired this Sunday.

The act, which was adopted in the weeks after the September 11, 2001 terror attacks, expands the government’s ability to monitor Americans in the name of national security.

As a senator from Illinois, Barack Obama was a critic of the Patriot Act noting that:

"This is legislation that puts our own Justice Department above the law. When National Security Letters are issued, they allow federal agents to conduct any search on any American, no matter how extensive or wide-ranging, without ever going before a judge to prove that the search is necessary. They simply need sign-off from a local FBI official. That’s all.

And if someone wants to know why their own government has decided to go on a fishing expedition through every personal record or private document – through library books they’ve read and phone calls they’ve made – this legislation gives people no rights to appeal the need for such a search in a court of law.

Three sections of the Patriot Act that stay in force will:

Allow court-approved seizure of records and property in anti-terrorism operations.

Permit surveillance against a so-called lone wolf, a non-U.S. citizen engaged in terrorism who may not be part of a recognized terrorist group.

Obama’s signature comes after the House voted 315 to 97 Thursday to extend the measure.

The Senate also approved the measure, with privacy protections cast aside when Senate Democrats lacked the necessary 60-vote supermajority to pass them. Thrown away were restrictions and greater scrutiny on the government’s authority to spy on Americans and seize their records.