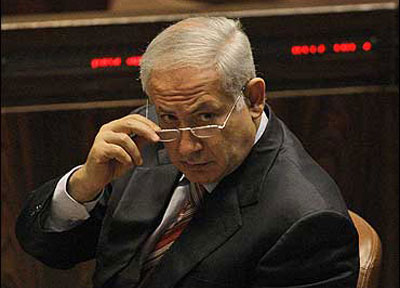 Israeli Prime Minister Benjamin Netanyahu has said that his father predicted the 9/11 attacks on New York’s twin towers back in the ’90s.

Haaretz reported that the remark was made during the 100th birthday celebration of the premier’s father, Benzion Netanyahu, a historian and Zionist activist.

The Israeli prime minister added that those who do not know their past will not understand their presence and will not be able to predict their future.

The Israeli newspaper Ma’ariv on 17 April 2008 had reported that Benjamin Netanyahu, then Likud leader, told an audience at Bar Ilan University that the September 11, 2001 terror attacks had been beneficial for Israel.

"We are benefiting from one thing, and that is the attack on the Twin Towers and Pentagon, and the American struggle in Iraq," Ma’ariv quoted the former prime minister as saying. He reportedly added that these events "swung American public opinion in our favor."

Professor Ben-Tzion Netanyahu was the personal secretary of Ze’ev Jabotinsky, the father of Revisionist Zionism. During the 80’s and 90’s - together with his son Benjamin and George H. Bush Sr. - he was responsible for supervising the Jonathan Institute (named after his elder son, Jonathan, killed in battle) and for developing the concept of "international terrorism" which was echoed by the media far and wide.[1]

In January 2001, the treasurer of both the Jonathan Institute and of Netanyahu’s electoral campaigns, real estate developer Larry Silverstein, secured a 99-year lease to the entire World Trade Center complex, including the twin towers. He took out a customized insurance policy which ’fortuitously’ covered acts of terrorism. After the 9/11 attacks he claimed - over and above the deductible amount - double compensation on the basis that there had been two separate attacks involving two different planes. At the end of a lengthy procedure, he pocketed 4.5 billion dollars, making a net profit of one billion dollars.