Iran does not need a military coalition

Iranian blogger Kourosh Ziabari is asking for what reason his country, which has already been through a long and devastating war at the hands of Iraq, should continue to put up with an embargo and the persistent threats of the United States. In passing, he reminds us that Imam Khomeini had forbidden the use of missiles against enemy civilian populations - a moral condemnation that was strictly adhered to at the cost of heavy losses and which today’s Iran scrupulously respects by refusing to manufacture the atomic weapon. 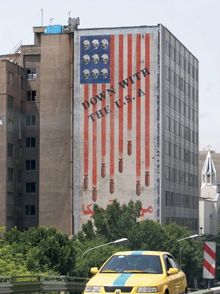 Historically, Iran has been a land of culture, arts, literature and home to an inspirational civilization which accommodates miscellaneous ethnic groups, subcultures, languages, dialects and traditional customs. Iranian people, even in the 21st century, think of their ancient 7500-year civilization as a prominent and matchless heritage which is mostly characterized by the domestic arts and crafts which have extended their roots all over their daily interactions, lifestyle and even business. It’s not an exaggeration to claim that Iran has been historically, and is contemporarily, the most pacifist nation of the world.

The Iran-Iraq war of 1980-1988 which was a pure manifestation of battle between the righteous and unrighteous highlighted the rectitude and morality of Iranian people. The U.S.-planned, Europe-backed war which was imposed on the newborn Iran discriminatorily, displayed the true meaning of peace and pacifism. While the Baathist Iraq of Saddam Hussein was receiving abundant military and monetary aid from the United States, United Kingdom, France, Soviet Union, Italy, Netherlands and Germany, Iranian infantries and combatants battled with empty hands, lacking an imperialist sponsor to help them build up their stockpiles; they could solely use the remnants of Shah’s military and artillery equipments which were nothing in comparison with the military equipments Iraq was receiving.

As an instance, one can cite the number of Iraq’s Fighter Aircrafts which exceeded 500 in 1987, while Iran was holding an insignificant total of 65 aircrafts which practically meant nothing for such an erosive war. To the extreme surprise of public opinions, even the Muslim nations of Arab League, Egypt, Jordan, Kuwait and Saudi Arabia backed Saddam militarily, fiscally and technologically. While Saddam Hussein was relentlessly bombarding the civilians in western and southern Iran, people’s voice of protest began to rise up throughout the country. The famous slogan of "missile should be responded by missile" was a catchphrase of those days; Iranians couldn’t comprehend the reasons of continued inaction by the armed forces who could at least utilize their minimum facilities to engage in the war and respond the bombardments actively; finally, the late Imam Khomeini broke the silence and promulgated that using missiles to drop on the helpless civilians is religiously unlawful and prohibited. Iran was adhering to the moral principles of warfare at the cost of its own people’s life while Saddam Hussein was releasing his complex of powerfulness and might by killing the innocent people of Iran. That’s why the 8-year war between Iran and Iraq tended to be known as the "Sacred Defense" by Iranians. The people of Iran were simply defending their lives against a ruthless dictator who was once a marionette for the U.S. and then became a subject of apprehension and trouble for them.

Iranians carry the coffins of Iranian soldiers during a funeral ceremony for 65 people killed during the 8-year Iran-Iraq war, whose bodies were recently recovered, in Tehran, Iran on November 6, 2007.
(Photo: UPI)

Abdollah Ekbatan, one of the survivors of Iran-Iraq war was once telling me the heartrending stories of Saddam’s brutality which I’m really incapable of retelling. I’m ashamed of contaminating my page with the stories which bewilders everyone; I can only extract from his accounts of war that Iranian combatants, fought "humanly"

Times have passed and Iran extricated itself from the quakes of imposed war; Iranians haven’t changed and are still the pacifist, peace-seeking and amiable people with whom you can interact cordially; however, they’re still hearing the alarms being rung for a new catastrophic war which U.S. and Israel are planning to wage.

I’m simply unable to understand what’s wrong with Iran that should be continuously under the threat of annihilation and war. Is it Iran that has occupied the lands of its neighbors and is expanding illegal settlements accordingly? Is it Iran that holds 200 nuclear warheads in its arsenals? Is it Iran that uses chemical weapons and white phosphorous against civilians in Gaza? Is it Iran that blockades the entry of humanitarian aides to a region where people are starving pitifully? Is it Iran that commits war crimes and violates the international regulations and the Geneva Convention?

Iranian people are so magnanimous and serene that are basically needless of weapons and troops. Their artillery is Persian poetry and their troops are the world-renowned scientists, writers, poets and philosophers to whom the human society owes forever. I believe that Persian proverbs and distichs absolutely suffice to hush the warmongers and hawks all around the world, or at least help them contemplate about the decisions they’ll be making. A famous Persian proverb reads: "The one who digs a well is the one who will fall in it". Personally, I feel that U.S. and Israel had better avoid digging a huge well, which they believe will take in Iran, because they’ll be the ones who will first fall in it.

Kourosh Ziabari (born 1990) is an award-winning Iranian journalist, peace activist and media correspondent. He has received the Superior Iranian Youth award from Iranian President Mahmoud Ahmadinejad. He has also won Iran’s 18th Press Festival first award in the category of political articles. Kourosh is a member of World Student Community for Sustainable Development and also a member of the European Association for Teaching of Academic Writing. He is a regular contributor to Tehran Times, Global Research, Iran Review and Counter Currents.

Who benefits from the protraction of war in Syria?

Sanctions are a form of warfare used by the U.S. and allies
Diana Johnstone in an interview with Tehran Times