Op-Ed by Evo Morales : the Rights of Mother Earth 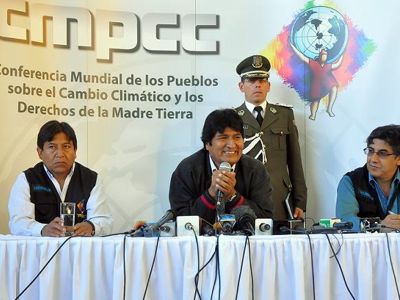 When I arrived at the United Nations climate summit in Copenhagen in late last year, the first thing that struck me were environmental activists braving the freezing weather to voice their disappointment at being locked out of the largest ever international meeting on climate change. Inside the conference, I realized that Bolivia was in a position similar to that of the protesters outside. We, the representatives of the majority of the world’s peoples, were effectively being left in the cold while a tiny group dominated by a few rich governments met in private to produce an unacceptable compromise (similar to the approach J. Bradford Delong supported in his April 22 Times Op-Ed article). When asked to add our signature to the badly named “accord,” my government would not compromise its dignity and refused to sign.

As an indigenous leader from Bolivia, I know what exclusion looks like. Before 1952, my people were not allowed to even enter the main squares of Bolivia’s cities, and there were almost no indigenous politicians in government until the late 1990s. In 2006, I entered the presidential palace in the main square of La Paz as the first indigenous president of Bolivia. Our government, under the slogan “Bolivia Changes,” is committed to ending the colonialism, racism and exclusion that many of our people lived under for many centuries.

This is why Bolivia will not accept an agreement reached between the world’s biggest polluters that is based on the exclusion of the very countries, communities and peoples who will suffer most from the consequences of climate change. In fact, some scientists tell us that the Copenhagen Accord could lead to temperature increases that would threaten much of humanity. This is why I said in Copenhagen that if governments could not come to an agreement because of self-interest or ideology, it is time for the people to decide.

We put that call into action this week by hosting a World People’s Conference on Climate Change in Bolivia, in the heart of the Andes mountains. We first expected about 10,000 people to attend, but in the end more than 31,000 people were present from more than 140 countries. Forty eight governments were represented by heads of state, ministers or other officials. Everyone came to work, in particular to produce concrete documents and proposals on 17 different themes related to the single most important issue of our lifetime.

United by deep concern and a shared hope, this diverse group of peoples asked the questions that have been largely absent in international meetings: What are the structural causes of climate change? If the human race is to survive, how must it re-think its relationship with Mother Earth? How can we as human beings collectively end irrational industrialization and consumption to cease provoking irreparable harm to our environment?

In seeking to address these important questions, the human race can benefit from the wisdom of the world’s indigenous peoples, who understand that we must live in harmony with nature. The peoples of the Andes believe in the concept of “living well” instead of wanting to “live better” by consuming more regardless of the cost to our neighbors and our environment. It is with these ancient teachings in mind that, exactly one year ago, the United Nations General Assembly accepted Bolivia’s proposal to celebrate International Mother Earth Day on April 22, which coincides with the final day of our conference.

We now propose to go one step further and begin collectively drafting a Universal Declaration of the Rights of Mother Earth. This will establish a legal framework for protecting our increasingly threatened natural environment and raising the global consciousness about Mother Earth, on which we all depend for life.

This was one of many proposals discussed in Cochabamba this week. During the intense and wide-ranging debates at the People’s Conference, we never expected to immediately agree on a global solution, but we do have the ambition of putting forward concrete proposals that represent a fundamentally democratic, inclusive and equitable approach to addressing climate change. We invite you to be a part of this urgent, ongoing dialogue, which remains open to all peoples and all governments that co-exist on this unique and fragile planet.

President of the Plurinational Republic of Bolivia (since 2005).

Evo Morales’ Speech to the G77 + China at the UN: Climate Change and the Rights of Mother Earth

Ecological Progress on the Qinghai-Tibet Plateau

Donald Trump on the Paris Climate Accord