Chomsky Warns of Rise of the Far Right in the U.S.

The wave of disillusionment with the government of Barack Obama is expanding as is the tendency among State governors, especially the most extremist, to look for a convenient scapegoat on whom to pin the responsibility. This situation is being closely watched by certain U.S. political and intellectual pundits, but no one can predict where it is leading. Eminent Professor Noam Chomsky offers his comments. 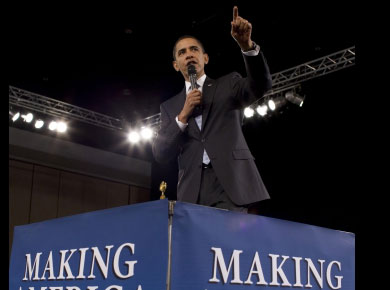 The right feeds on frustration and so ultra-conservatives advance such as the Tea Party. Latinos and blacks are persecuted, like fascist Germany did to the Jews, suggests the intellectual.

Disenchantment with the government and politicians has grown to unprecedented levels in recent times according to research. There is growing anger, uncertainty, pessimism and distrust in Washington, and the fruit of popular frustration is being harvested by rightists.

"Never seen anything like this in my life," said Noam Chomsky. Interviewed by Chris Hedges for the website Truthdig. He added that the mood of the country is terrifying. The level of anger, frustration and hatred of institutions is not organized in a constructive manner. Is diverted into self-destructive fantasies in reference to expressions of the populist ultra-right.

Anti-government sentiment has increased in society and only 22% trust the government, according to research by the Pew Research Center, one of the lowest points in half a century. For almost any conceivable measure, today’s Americans are less positive and more critical of their government. There’s a perfect storm of conditions associated with mistrust of the government: an abysmal economy, an epic pessimistic and public discontent with Congress and elected officials, said Andrew Kohut, president of the Pew Research Center, in summarizing the findings of a series of surveys.

The Pew report noted that only 25% have a favorable opinion of Congress - the lowest point in 50 years - and 65% expressed a negative opinion. Increasingly, Americans felt that the government has misplaced its priorities and that it has a negative impact on their daily lives. About 62% say the government’s policies only benefit some groups and 56% believe that the government is not doing enough to help the average American.

In addition, it confirms the increase of anti government sentiment among a segment of society, doubling are those who say they are upset with the federal government: 10% in 2000 to 21% today. And 30% perceive that government is a threat to their personal freedom.

Pew also reported, in a setback compared to a survey of months ago, that most are suspicious of a greater state role in the economy, with the exception of the financial sector, where a large majority want the government to strictly regulate financial companies.

Perhaps the sector most unhappy with the government is called the Tea Party movement, ultra-conservatives who came a year ago in protest against the economic stimulus bill, which grew in visibility in the campaign against health reforms proposed by the government of Barack Obama. This movement is mostly composed of white men, aged 45 or so, who describe themselves as upset or angry with Washington.

Recent research from the New York Times / CBS News poll revealed that 18% of Americans identify themselves as supporters of the Tea Party, classify themselves "very conservative" and are very pessimistic about the direction of the country and severely critical of Washington and, of course, Obama. Over 90% of them believe that the country moves to a wrong path and the same percentage disapproves of the president and his administration policy. Already 92% of respondents estimated that Obama leads the country "toward socialism" (an opinion shared by more than half the population in general).

Moreover, the expressions of popular right-wing anger are registered when referencing more hate crimes, a rise of radical right-wing groups, as well as unofficial reports of a growing number of death threats against the president. Public safety agencies have raised the alert status for what is called "domestic terrorism."

Incidents were reported, several under investigation, of acts of intimidation against congressmen and other elected officials. Earlier this month, more than 30 governors received letters from an anti-government, ultra-conservative group who demanded their resignation in a period of three days (although there was no threat of violence), which meant that federal authorities have warned local police that the letters could lead to violent behavior. As such, there are more examples throughout the country.

The wave of disillusionment with the government and its rulers causes concern among some politicians who do not know what impact this might have on the elections of next November. But for others the issue is more alarming.

"It’s very similar to Weimar Germany, the parallels are striking." Here, too, there is a tremendous disappointment with the parliamentary system, pointed Chomsky interviewing on Truthdig.

"The United States is very lucky that no honest and charismatic figure has appeared, and if this were to happen this country would be in real trouble for the frustration, disillusionment and the justified anger combined with the absence of a coherent response," he concludes.

In Germany, he recalls, an enemy was created to explain the crisis which was the Jew. "Here they are the illegal immigrants and blacks. We will say that white men are a persecuted minority. We will say that we must uphold and defend the honor of the nation. Military force will be exalted. There will be blows. This could be converted into an undeniable force. And if it takes place, it will be more dangerous than Nazi Germany. The United States is a world power ... I do not believe that this is far from happening," he says.

Formerly in charge of the editorial page of the Wall Street Journal, David Brooks is editorialist for the New York Times and the Weekly Standard.