May 20, 1902: Cuba; Independent Republic or Neo-Colony of the United States?

Before 1959, Cuba celebrated May 20th as Independence Day. We were told in school that an independent republic had been born, that Spanish domination had ended and we had full freedom. All this of course, thanks to the “generous help” of the government of the United States, whom we should eternally be grateful to. 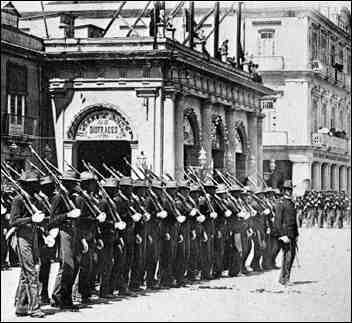 Our history had been tampered with, to please the individual interest of the then governments and their imperial masters. The cruel truth was that on May 20th, 1902 Cuba had stopped being a Spanish colony only to turn into a neo colony of the United States of America.

In 1898, after 30 years of heroic struggle, the Cuban Liberation Army had virtually defeated the Spanish colonial army. Spain was not able to sustain the war from a military, economic or political point of view. The colonial moral had collapsed faced with the determination of the independence fighters.

It was precisely at that moment in which the US government took advantage of the situation, taking as a pretext the explosion of the Maine ship, to satisfy its old wishes of intervening in Cuba and materializing its dreams of annexing the island. Only with the support of the Cuban Liberation Army (Mambi) could the objective of disembarking and defeating later the colonial army were possible. The Hispanic-Cuban-American war was described by Vladimir Lenin as the first imperialist war in the history of humanity.

But after the war; was Cuba truly independent? Were the actions of the US government altruistic or loathsome? A brief look at history demonstrates the opposite to what we were taught in school, with some exception of patriotic teachers who tried to unmask the truth.

On December 10th, 1898, with the Paris Treaty Spanish colonialism in Cuba has officially ended. The first injustice and offense to the dignity of the Cuban people was its exclusion of this negotiation. The United States negotiated an independence that it had not won and Spain renounced to a right it had lost to the Cuban people.

The United States was not willing to undergo an armed war against the Cuban revolutionary army that had defeated a colonial power after three decades of bloody wars. They prepared the conditions to control the island by a less costly way which should allowed them to also gain credit as liberators

After the war, the US army and government maintained its occupation of Cuba. The Cuban government had its hands tied in terms of freedom.

On June 16th, 1900, by the 164 US Military Order, the first elections of mayors, councilmen, treasurers, municipal judges and other public officials others were held. The so called US democracy showed its true essence. Only men over 21 years of age were able to vote, no women allowed, only those that knew how to read and write, have a capital of no less than 250 pesos or have served in the Rebel Army without any “unfavorable notes” in his military records.

Due to these and other imposed restrictions, only about 10 percent of the population of age was able to vote. However, the outcome was not what the imperial power expected.

Similar elections were held in June of 1901. But these elections had more limitations, that included coercive measures and fraud to guarantee a majority of votes in favor of the candidates that represented the Yankees interests.

Another military order, the 91, set the guidelines for these elections. The voters could only elect 60 percent of the councilmen. Those with the rights to do so were turned down when attempting to register. The list of electors was hidden from voters in order for these not to verify if their names were among them. Names were changed which later nulled their rights to vote.

Coercive measures were used, irregularities were carried out on the polling stations and those that participated in independence actions against Spain were refused. Successive Cuban governments dependent from the US learned from this “democratic lesson”.

When the presidential election of 1901 was held, the abuses against the Cuban nation went beyond what one could have expected. Three candidates participated in those elections. Maximo Gomez Baez, hero of Cuba’s independence war withdrew his candidacy after witnessing the abuses. Another patriot, Bartolome Maso did the same refusing to give into US mandates during those elections.

Only one candidate was left for the elections: Tomas Estrada Palma, who had succeeded Jose Marti as Delegate of the Cuban Revolutionary Party and who had to resign to his 26 year old US citizenship.

This man, who had betrayed the ideals and the cause of Marti and who was unconditional to the US government rose to power in an electoral process with barely 7 percent of the Cuban eligible people to vote. But that was not enough for the interests of the United States in Cuba. Something much more secure and efficient was necessary. That is why the Platt Amendment was born.

On February 28th, 1901, US Senator Orville H. Platt proposed an amendment to the Army Appropriations Act which once approved by his country, had to be annexed to the Cuban Constitution that would rule the new Republic. Or Cuba accepted the amendment or it would remain under military occupation. That was the choice.

One of its articles separated the Isle of Pines (today Isle of Youth) from Cuban jurisdiction, an offense kept until 1925. Another part of the Platt Amendment gave the US the right to military intervene in Cuba under the false pretext of conserving the island´s independence, maintain an adequate government, and protect lives, properties and independence.

Cuba was also forced to rent out services from the United States in order for Washington to maintain the independence and protect Cuba. From this amendment the US Naval Base in Guantanamo was born and still remains against the will of the Cuban people and is currently used as an international torture and crime center by the government of the United States despite reiterated denunciations made at the highest international institutions.

Cuba was prevented from establishing treaties or agreements with another power or purchase public debts if they were not from the US government.

Tomas Estrada Palma himself dissolved the Cuban Revolutionary Party founded by Jose Marti to carry out the Revolution and later lead the destiny of the Cuban nation. The Liberation Army had been dissolved. What independence or what liberties were left for

After 30 long years of struggle; Independent Republic or Neo-Colony of the US?

The very same US military governor in Cuba during the occupation period, Leonard Wood announced the outcome and projects from the Platt Amendment very clear. “Of course, Cuba was left with little or no independence with the Platt Amendment and what was left was the annexation (…) It is evident that the island is absolutely in our hands (…) With control, which without a doubt, would turn Cuba into a possession, in a short time we will practically control the sugar commerce in the world (…) The island will gradually be Americanized and in due time we will have one of the richest and desirable possessions in the world”.

True independence, liberty, sovereignty and self determination, had to wait 60 more years until January 1st, 1959 when Commander in Chief Fidel Castro proclaimed the triumph of the Cuban Revolution.

From this historical truth the hatred of successive US governments and the extreme right wing sectors of Cuban origin in Miami against our revolutionary process emerged. That is why, for that wolf pack, May 20th will continue being a “patriotic day” used to revive their rage and howled hysteria against Cuba.