With just a 30 percent turnout, the election of new Colombian President Juan Manuel Santos - one of Washington’s closest disciples in Latin America - was hailed as a "victory for democracy" by major western media outlets. However, they blithely omitted to report on Santos’ presumed role in the killings of over two thousand people while he was Defence Minister, and on his close involvement with death squads and narco traffickers. At the same time, Venezuela’s efforts to forge a more just society are relentlessly berated by the same media.

The major electronic and print media CNN, FOX News, Washington Post, the New York Times, The Wall Street Journal, and the once liberal Financial Times (FT) hailed Santos election, as a great victory for democracy. According to the FT, “Colombia not Venezuela is (the) best model for Latin America” [1]. Citing Santos “overwhelming” margin – he garnered 69% of the vote, the FT claimed he won a “strong mandate” [2]. In what has to be one of the most flagrant cover-ups in recent history, the media accounts exclude the most egregious facts about the elections and the profoundly authoritarian policies pursued by Santos over the past decade.

The Elections: Guns, Elites and Terror

Elections are a process (not merely an event) in which prior political conditions determine the outcome. During the previous eight years of outgoing President Uribe’s and Defense Minister Santos’ rule, over 2 million, mostly rural poor, were forcibly uprooted and driven from their homes and land and displaced across frontiers into neighboring countries, or to urban slums. 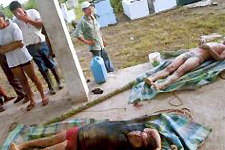 The Uribe-Santos regime relied on both the military and the 30,000 member paramilitary deathsquads to kill and terrorize entire population centers, deemed “sympathetic” to the armed insurgency, affecting several million urban and rural poor. Over 20,000 people were killed, many, according to the major Colombian human rights group, falsely labeled “guerrillas”. Santos as Defense Minister was directly implicated by the Courts in what was called “false positives”. The military randomly rounded up scores of poor urban youth, shot them and claimed a resounding victory over the FARC guerrillas.

Several of the most important captured paramilitary deathsquad leaders testified that over 60 of the congress people backing Uribe – Santos were on their payroll and they “ensured” votes from regions under their control. Faced with damaging testimony, Uribe-Santos double-crossed their narco-deathsquad comrades and “extradited” them to the U.S. where the judicial process excluded evidence linking them to the mass killings at the behest of Uribe-Santos. 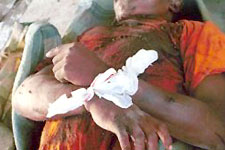 In other words all the social sectors with social and political grievances against the regime were terrorized, many of their local opinion leaders, killed, displaced or driven into exile … undermining the possibility of sustained independent socio-political organization.

On election day, the regime mobilized over 350,000 military and police officials, many involved in the decade-long repression, to “oversee” the elections and to remind the voters of the force behind the “official candidate” [3].

The electoral outcome was far from the “mandate” of the Colombian people as claimed by the mass media. The ‘winner’ was the “abstentionists” with 56% of the electorate, the position advocated by the FARC. Now clearly the majority of the abstentionist vote did not reflect support or sympathy for the FARC; rather it reflected disaffection with the regime’s violent repression, massive dispossession of millions and its total failure to deal with the under and unemployment affecting 40% of the economically active population.

In fact Santos received 30% of the vote of the electorate, hardly a mandate. If we examine the social-ecological background of the voters, it is clearly a mandate from the elite. The highest levels of abstention were among several distinct groups. Among the shanty towns and rural areas suffering from repression and neglect, abstention rose to over 80%. In contrast, in the middle and upper class sectors of the major cities, over 60% voted for the candidate of the regime. Uribe-Santos tried to explain away the massive abstention by citing the weather (rain) and the World Cup soccer matches. However the low turnout took place throughout the country, in dry and inclement weather. And the games did not occupy the entire day of voting. The mass media systematically ignored the horrendous crimes under Defense Minister Santos, his indictment in the “false positive” murders, his long term large scale association with the death squads and with the Uribe regimes promotion of narco trafficking. They ignored his support for de-regulating the financial system, resulting in the defrauding of hundreds of thousands of Colombian small investors.

Yet the Financial Times [4] favorably compares Colombia under Uribe-Santos against Venezuela under Chavez, “Crackers about Caracas? Latin American should be bonkers about Bogota instead”. According to the FT Venezuela under Chavez is said to be unsafe, authoritarian and economically in decline. The editors of the FT, echoing the rest of the media, claim Colombia is a prosperous democracy, with a system of checks and balances; with safe and peaceful neighborhoods … except when the neighborhoods of the poor protest unemployment or the rural villagers march against land grabs by the landlord funded gunmen. The FT fails to mention the resurgence of paramilitary gangs terrorizing the Colombian countryside [5] but instead they focus on street crime in Caracas.

The Venezuelan government, contrary to the U.S. media, promotes community based social movements which would be targets of military raids in Bogota.

The only “paramilitary” groups in Venezuela are cross-over’s from Colombia, pursued and punished by the Venezuelan National Guard. In Venezuela trade unions participate in the management of major industrial plants, unlike Colombia where they are murdered including workers in the major Coca Cola, coal, oil and banana industries.

Behind the media lies and falsifications abut Colombia’s election and its political leaders are several basic considerations.

1.) Uribe-Santos are feverent free market advocates, eagerly pursing a free trade agreement held up in the U.S. Congress because of their killing fields.

2.) Uribe-Santos are unconditional clients of the Pentagon, receiving $6 billion in aid and handing over 7 military bases, under U.S. jurisdiction to threaten Venezuela, Ecuador and any other country the Obama regime deems a hostile to U.S. domination.

3.) Uribe-Santos recognized the Honduras regime, product of a U.S. backed military coup in mid 2009 – contrary to the rest of Latin America.

The fact that the mass-media have so enthusiastically embraced a regime with the worst human rights record since the fall of the military dictators of the 1970’s - 1980’s [6] is indicative of the right turn under the Obama Wall Street regime. According to the White House and media, deathsquad democracies like Colombia now qualify as “role models” for Latin America. The problem is that neither the vast majority of Latin America citizens, nor most of the democratic parties in the region are buying: they prefer democracies without deathsquads, foreign military bases and narco-dealing Presidents. At present, the White House’s three leading allies in the region, Colombia, Peru and Mexico produce and sell 80% of the cocaine in the region. Will this appear in the media’s salutations to newly elected presidents?

The Assassination of Greece

Russia’s Vulnerability to EU – US Sanctions and Military Encroachments

Israel Buys the US Congress: Sabotaging the US-Iran Peace Negotiations

US- Venezuela Relations: A Case Study of Imperialism and Anti-Imperialism